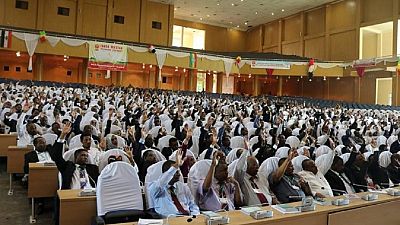 <p><strong>In Ethiopia, prime minister Ahmed Abiy’s political party, the Oromo People Democratic Organisation (<span class="caps">OPDO</span>) has rebranded, changing its name and logo as it seeks to position itself in the changing political space in Oromia region and at the national level.</strong></p> <p>At a delegates conference attended by over 6000 members of the party including the chair Abiy, and his vice and president of Oromia state, Lemma Megersa, <span class="caps">OPDO</span> changed its name to Oromo Democratic Party (<span class="caps">ODP</span>).</p> <p><span class="caps">OPD</span> also retired 14 long serving officials of the party.</p> <p>Both Abiy and Megersa in their addresses to the delegates, urged political parties in the region to united and consolidate the ongoing political reforms.</p> <blockquote class="twitter-tweet" data-lang="en"><p lang="en" dir="ltr">Ethiopia PM asks Oromo parties to unite, safeguard ongoing reforms <a href="https://t.co/M5X2QbvRlF">https://t.co/M5X2QbvRlF</a></p>— africanews (@africanews) <a href="https://twitter.com/africanews/status/1042783809966694400?ref_src=twsrc%5Etfw">September 20, 2018</a></blockquote> <script async src="https://platform.twitter.com/widgets.js" charset="utf-8"></script> <p>Since taking power, Abiy has lifted a state of emergency, freed political prisoners and removed leaders of banned groups including the Oromo Liberation Front (<span class="caps">OLF</span>) from a blacklist, paving the way for their return to the country.</p> <p>But Abiy’s reforms have yet to halt ethnic violence. Clashes between Oromos and ethnic Gedeos in the south caused nearly a million people to flee their homes soon after he took power.</p> <h2 style="font-size:16px;">Politicking ahead of 2020 poll</h2> <p>As the political players gear up for the 2020 elections, Abiy and <span class="caps">ODP</span> will be working to position themselves as the party that can not only fulfil the aspirations of the agitated Oromo people, but also appeal to national interests like security and economic growth.</p> <p>Abiy has pledged to deliver a democratic election in 2020, adding that he would organise a smooth transition if the ruling coalition loses the election.</p> <p>At the beginning of September, two major opposition parties, the Oromo Federalist Congress and <span class="caps">OLF</span> <a href="http://www.africanews.com/2018/09/11/major-oromia-parties-agree-merger-for-ethiopia-s-2020-polls/"target="_blank">merged</a> to ‘represent the interests of the people of Oromia’.</p> <p><strong><em>Photo credit: @fanatelevision</em></strong></p>