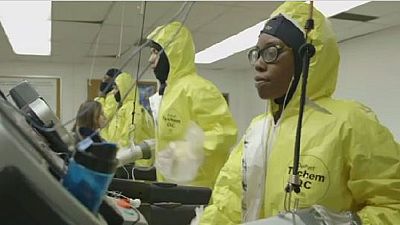 Protective suits are essential kit for some workers like firefighters and healthcare workers, but staying cool enough to work for long periods is a challenge.

A team at California’s Stanford University working on the regulation of body temperature have created a cooling system that could double the amount of time workers can spend wearing protective suits.

The research was prompted by healthcare workers from Sierra Leone who experienced debilitating heat when wearing suits that protected them from the highly infectious Ebola virus.

Craig Heller, professor of biology in the School of Humanities and Sciences, said that they reported being able to work for just 20-30 minutes before overheating.

Overheating puts them at risk of illnesses like heat stroke and limits their mental and physical capabilities. This is a concern for workers who could be exposed to a deadly virus – especially with new outbreaks of the Ebola virus in Democratic Republic of Congo this year. Since the latest outbreak was declared on August 1, at least 90 people have died from the virus.

The cooling system developed by the Stanford researchers looks like a hydration pack used in sports like running or cycling. One “bladder” contains frozen water and lies next to another holding circulating fluid. Tubes from the backpack deliver cooling fluid through pads in the underside of fingerless gloves. A valve in the tubing of the system mixes warm fluid returning from the gloves with the colder fluid from the bladder, allowing the temperature of the glove to be regulated.

This works on the principle that most heat is emitted from palms of the hands, soles of the feet and the face

Heller’s data from previous research had suggested that water at a temperature of about 15 to 16 degrees Celsius (59-61 Fahrenheit) was most effective.

The system has been tested on undergraduate students wearing similar protective suits to those work by Ebola health workers, walking briskly on treadmills with different gradients. Some wore the cooling system and others did not, and they could stop walking at any time.

However, they had to stop either when their heart rate reached 95 percent of their maximum, their core temperature hit 39 degrees Celsius (102 F) or after 40 minutes, whichever came first. Their nose temperature was measured with a 60cm probe inserted into their mouth or nose.

In these lab conditions, the cooling system allowed the students to spend at least double the time being active than without it, and some tripled or quadrupled the time spent being active.

The team is working on a prototype that can be mass produced and is continuing to study the effect of overheating on cognition.