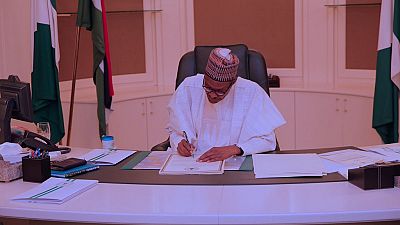 The decision was tied to reports of anticipated flooding in parts of Africa’s most populous nation. A statement issued by the chief of staff said, NEMA Director General, Mustapha Maihaja, could declare a national disaster in the event of flooding.

The President’s directive follows a warning by the Nigeria Hydrological Services Agency that Rivers Benue and Niger had almost reached levels that resulted in flooding in 2012, which led to lost of lives and destruction of property.

Abba Kyari’s letter titled: “Situation Report on the River Flood Along the Banks of Rivers Benue and Niger,” read in part: ““Delegation of authority to the Director General of NEMA to activate the Disaster Response Units of the military for possible search and rescue missions.

“The procurement and proportionate stocking of relief materials and health related items up to N3billion to provide for the needs of possible victims.”

Nigeria’s more pressing challenge is in the area of security with an ongoing combat against Boko Haram insurgents in the Northeastern Borno State. Banditry has also rocked Kaduna and Zamfara states.

A mid-year surge in intercommunal violence across the country’s middle belt claimed the lives of hundreds. Security – police and military – deployments have been made to remedy these situations.