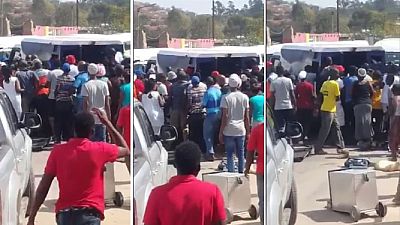 The News24 news portal reported that the van belonged to the G4S Cash Solutions company and at the time of the attack was performing a cash collection service.

The report added that a police spokesperson Colonel Brenda Muridili had confirmed the incident which occured on Saturday afternoon.

The suspects held the security guards at gunpoint and the vehicle was blown up.

She told News24 that an unknown number of suspects had opened fire on the armoured vehicle, bringing it to a standstill. “The suspects held the security guards at gunpoint and the vehicle was blown up,” Muridili said.

The suspects are said to have fled the scene in three vehicles after carting off an undisclosed amount of money. It was the turn of ordinary residents who swarmed the bombed car to take their share.

The police said none of the looters had been arrested but that their conduct was condemnable: “It contaminates the crime scene, which makes it difficult or almost impossible for the crime scene management to recover evidence,” Murudili said.