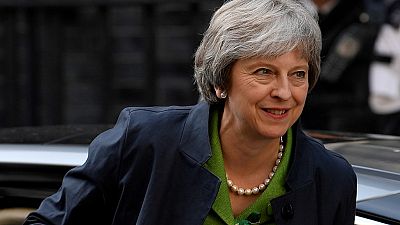 British prime minister, Theresa May will begin her maiden trip to the African continent on Tuesday in South Africa, before heading to Kenya and Nigeria, the other economic powerhouses in the region.

May, who is leading the United Kingdom through a chaotic transition as they seek to leave the European Union, is on a mission to demonstrate that Britain can thrive alone.

A statement from No 10 Downing Street said the delegation of UK ministers, business people and officials are arriving to “focus on a renewed partnership between the UK and Africa, which will seek to maximise shared opportunities and tackle common challenges.”

A more prosperous, growing and trading Africa is in all of our interests, and its incredible potential will only be realised through a concerted partnership between governments, global institutions and business.

Ahead of her visit, May described her visit as ‘ a unique opportunity at a unique time for the UK to set out our ambition’.

“A more prosperous, growing and trading Africa is in all of our interests, and its incredible potential will only be realised through a concerted partnership between governments, global institutions and business,” the PM said.

Britain to use aid to boost trade

In South Africa, May is expected to tell an audience that Britain will use its international aid budget to boost its national interest and deepen trade ties with Africa.

She is expected to recommit to maintaining the overall British aid budget at 0.7 percent of economic output but will add that she will be “unashamed” to use it in a way that helps Britain.

The target has previously come under fire from many of May’s own lawmakers who say it is a blunt tool that is too high and should be spent elsewhere or in Britain itself.

Britain seeks to be Africa’s No.1 investor

May will say she wants Britain to become the biggest investor in Africa out of the countries in the Group of Seven nations, overtaking the United States, by using the aid budget to help British private sector companies invest on the continent.

“I am unashamed about the need to ensure that our aid programme works for the UK,” May will say in her speech, according to extracts released by her office.

“Today I am committing that our development spending will not only combat extreme poverty, but at the same time tackle global challenges and support our own national interest. This will ensure that our investment in aid benefits us all, and is fully aligned with our wider national security priorities.”