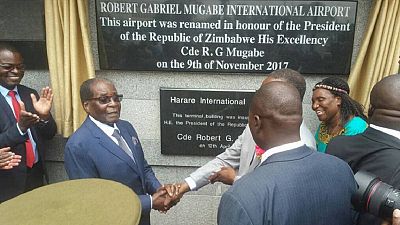 Addressing a press conference on Tuesday, Secretary General of the group Victor Matemadanda said the deposed president had shown traits of traitor in the run up to the July 30 elections.

Spotting scarves with the picture of President Emmerson Mnangagwa, the group also addressed issues relating to the just ended presidential polls, insisting the the president had won an indisputable first round victory.

“The international community led by America are saying this election was not run properly, condemning ZEC. Now they want the courts to say this was wrong or right. We will not let America run this country. The president elect won by 50.8 %, full stop,” Matemadanda added.

He went on to take a swipe at the main opposition candidate, Nelson Chamisa, who he said was a dictator. Chamisa came second in presidential polls with over 44% of votes according to the Zimbabwe Electoral Commission.

He led the Movement for Democratic Change Alliance into the polls, the party has filed a court challenge to the result. Hearing is due to commence on Wednesday. They are asking for the vote to be annuled citing irregularities.