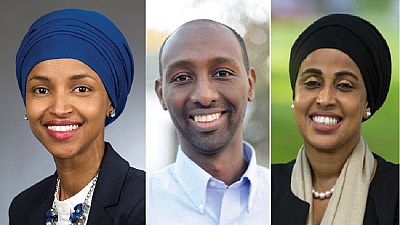 Three Somali-Americans are lacing their boots to contest for legislative elections in the United States. The Minnesota trio are gunning for two House of Representative seats and a historic seat in Congress.

The most prominent of them being Ilhan Omar who is left with one hurdle to become the first Somali-American to occupy a seat in the U.S. Congress.

After a gruelling campaign, Ilhan won the Democratic Party’s nomination to contest for Congress in elections slated for November 2018.

Political watchers say she is all set to win the seat of Keith Ellison, current Congressman for Minnesota’s Fifth District. She previously served as the first Somali-American to be elected to the Minnesota House of Representatives in 2016.

Incidentally, it took another Somali-American to annex the nomination to replace her in the race for Minnesota House of Representatives. Mohamud Noor is aiming to become representative for the Minessota House legislature, 60B district.

Then still with the Democratic Party ticket, another woman won the race aiming to enter the House of Representatives; district 62A. Poll experts maintain that Hodan Hassan is also most likemy to be elected.

Hodan describes herself as per her twitter bio as: a woman of color who dreams of a beloved community. Social activist/feminist who fights racism, discrimination, sexism, and religious intolerance everyday.

Somali-Americans score trio of wins in Minnesota Democratic Party primary. IlhanMN is on the verge of becoming 1st Somali-American elected to US Congress; Mohamud Noor wins seat vacated by Ilhan Omar in 60B district, MN House, hodan4house wins race for 62A district in state rep pic.twitter.com/aBxstpAIPO