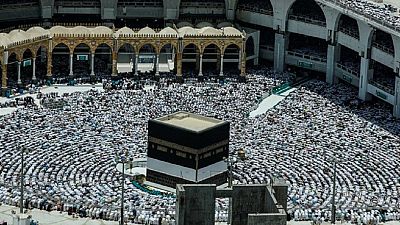 The number of Egyptians who will make the holy pilgrimage to Mecca has dropped by 20%, with only 64,000 of Egypt’s 80,000 hajj quota, Parliamentary Affairs Minister Omar Marwan told state news agency MENA.

Mahmoud Aouni has always wanted to make the hajj pilgrimage to the holy city of Mecca in Saudi Arabia, an important religious duty for all Muslims, but says he might never be able to do so now because of Egypt’s economic woes.

“They say charity begins at home. In the current economic climate, that’s where it stays,” said Aouni, a 47-year-old youth ministry worker who like many Egyptians has been forced to put off his plans indefinitely by the rising cost of living.

It’s because of the economic situation and the umrah fees. Egypt and Saudi’s decision to make people who want to do it more than once pay more has meant many people simply aren’t going back again.

All Muslims are expected to join the annual hajj at least once in a lifetime, provided they are physically and financially able. But many Egyptians have been badly hit by soaring prices, especially of fuel and electricity, as the government slashes state subsidies under IMF-backed economic reforms.

Even wealthier pilgrims are now finding the journey more difficult after Saudi Arabia and Egypt both imposed additional fees for Muslims repeating the lesser pilgrimage to Mecca, known as the ‘umrah’, within three years.

Ahmed Ibrahim, a tourism ministry official who works on its hajj committee, said the number of Egyptians performing the umrah, which can be done at any time of the year, had dropped by almost 50 percent in 2018 from last year.

“It’s because of the economic situation and the umrah fees. Egypt and Saudi’s decision to make people who want to do it more than once pay more has meant many people simply aren’t going back again,” he said.

Officials at Cairo airport said several flights to Saudi Arabia’s Jeddah airport ahead of the pilgrimage, which starts next week, culminating in the Eid al-Adha feast, had been cancelled.

Saudi Arabia set a 2,000 riyal ($533) fee for Muslims performing the umrah journey for a second time within three years. This year Egypt also raised its own fee for citizens planning to make a second umrah pilgrimage.

Pilgrimage costs have doubled to 60,000 Egyptian pounds ($3,361) for people travelling on economy packages by land, while luxury packages – which include flights, upmarket accommodation and other services – have increased to 152,000 Egyptian pounds from 100,000 last year, hajj companies say.

“Plane ticket prices have gone up, and the hajj fees here and in Saudi also, so it is those with money who get to go,” he said. “But it is in my plans. God willing, I will do the haj when I can get things together.”