Julius Malema tells 'too old' Mnangagwa to serve one term 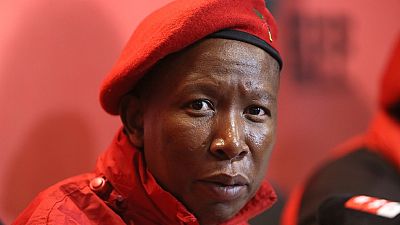 Out spoken South African politician, Julius Malema says Emmerson Mnangagwa, just declared President in Zimbabwe after elections on Monday, must serve one term and “let the younger generation take over”.

Malema, 37, who leads the Economic Freedom Fighters (EFF), was quick to congratulate 75-year-old Mnangagwa after his disputed election win.

“Let Zanu PF begin a process of producing younger people who will compete with Chamisa. President Mnangagwa this is a brotherly advice, a son’s call that says one term is enough, you are too old, let the younger generation take over.”

CIC Julius_S_Malema calling upon President Mnangagwa to serve one term, and allow the younger generation to continue. pic.twitter.com/VTBOjy0b5d

Malema has not hidden his support for Zanu PF in the past, and previously urged former President Robert Mugabe to quit for a younger leader. Mugabe, who did not heed the advice, was swept away in a military coup in November 2017 led by Zimbabwe’s new Vice President Constantino Chiwenga, who was then army commander.

Mnangagwa polled 50.8 percent of the vote against Chamisa’s 44.3, according to the Zimbabwe Electoral Commission (ZEC).

But Chamisa has called the result “fake”, insisting that ZEC had fiddled numbers during a four-day delay in announcing results. He has vowed to use “legal and constitutional means” to “defend the people’s vote.”

This time I agree with you…