South Africa, I. Coast and Kenya shine at Athletics Championships in Nigeria 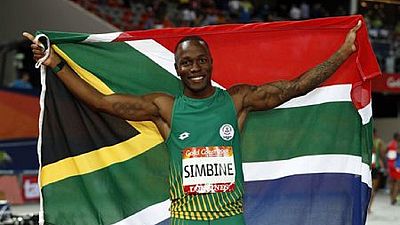 After rather controversial and demoralising pre-African Championships scenarios, where over 300 athletes were stranded at the Lagos Airport in Nigeria, the event has finally kicked off with stories of medals and champions taking over.

Simbine won his race into a headwind in 10.25 seconds.

I know for now I am going to represent Africa in the Continental Cup so this made me want to work harder and train more. It is a great feat.

“For me, it is marvelous,” he said. “I know for now I am going to represent Africa in the Continental Cup so this made me want to work harder and train more. It is a great feat.”

Winners at the championships earn berths on the African team in the Continental Cup which matches teams from Africa, Asia, Europe, Oceania, the Americas, South America and the United States on Sept. 8-9 in Ostrava, Czech Republic.

“I would have done 10 seconds but the wind was not favourable to me,” she said of the 2.3 metres per second headwind.

Africa’s top 200m woman, Nigeria’s Blessing Okagbare, pulled out of that competition, according to media reports.

Ruswahl Samaai surprised world champion Luvo Manyonga in a showdown of South African long jumpers with Samaai winning with a leap of 8.45m on his fourth attempt.

Manyonga, the reigning African champion, was two cm behind.

Oluwatobiloba Amusan of Nigeria won the women’s 100m hurdles gold medal with a time of 12.86 seconds. Rikennete Steenkamp of South Africa (13.18) and Rosvitha Okou of Ivory Coast (13.39) took the silver and bronze.

“I am not surprised, because I have prepared hard for this all year,” Amusan said.”My target at the Continental Cup is to do the best I can.”

Transportation problems that left several hundred athletes stranded at Lagos airport, some for nearly three days, forced a major revision of the competition timetable on Wednesday with officials apologising on Thursday for the shortcomings.