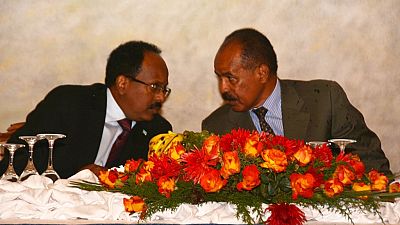 Djibouti has formally responded to a recent call by Somalia that United Nations Security Council (UNSC) sanctions on Eritrea be lifted. According to Djibouti it was ‘deeply shocked’ by that position.

Somali president Mohamed Abdullahi Mohamed on a three-day official visit to Asmara said the sanctions imposed since 2009 had to be lifted given the current political and diplomatic developments in the Horn of Africa region.

But in a statement in reaction to the Somali president’s view, the Djiboutian Embassy in Somalia wrote in an August 1, 2018 statement:

... it is unacceptable to see our brotherly Somalia supporting Eritrea which is occupying part of our territory and still denying having Djiboutian prisonsers.

“As a sovereign state, there is no doubt that Somalia has the right to establish diplomatic relations with the countries of the region, however, it is unacceptable to see our brotherly Somalia supporting Eritrea which is occupying part of our territory and still denying having Djiboutian prisonsers.”

It continued that the wiser line of action would have been for President Mohamed to call for peaceful resolution of the border crisis that has strained relations between the two neighbours.

The statement accused Somalia of historic less support of Djibouti which it said had led to blinded supported for Eritrea plus an advocacy that Eritrea be free despite its stubborn nature.

“We will not tolerate with ruthless talks while our young men and women are yet here defending Somalia’s peace and stability,” the statement concluded.

The disputed land in question is the Dumeira mountain and Dumeira island which Djibouti claims is being illegally occupied by Eritrea. The issue of Eritrea’s continued holding of Djiboutian prisoners has also been central to the dispute.

The last time tensions between the two came to the fore was in June 2017 when Qatar withdrew its peacekeeping force in the area at the height of the Gulf Crisis. Djibouti at the time accused Asmara of deploying soldiers to the disputed areas.