Tanzania threatens pollster that said Magufuli's popularity has reduced by 41% 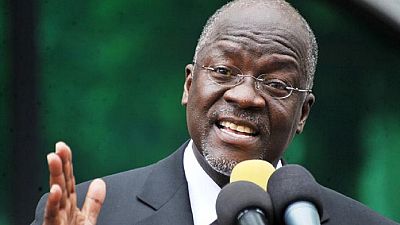 Tanzania’s government has given a pollster that published an opinion poll showing that President John Magufuli’s popularity is waning, seven days to explain why ‘appropriate action should not be taken against them’.

Researchers from research outfit Twaweza last week said President Magufuli’s approval ratings had plummeted by an alarming 41% since coming to power in 2016.

During his first year in office, Magufuli had a record setting 96% approval rate, largely driven by his crackdown on corruption and laxity of public officials.

Twaweza’s survey, called ‘Speaking Truth To Power’, which collected opinions from 1,241 respondents from Tanzania Mainland using mobile phones, says the popularity which dropped to 71% in 2017 has since reduced to 55%.

In a letter to the Executive Director of Twaweza dated July 9, the acting Director-General of the Commission for Science and Technology (COSTECH), Dr Amos Nungu, said the not-for-profit organisation had not applied to the commission to conduct the research.

Article 37(2) of the controversial Statistic Act (2015) prescribes a fine of up to $878 (Sh2,000,000) or imprisonment of not less than six months or both to a person who would publish or possess statistical information that the law deems unauthorised for publication.

Twaweza confirmed receipt of a letter from COSTECH on Thursday, adding that they ‘are working on our response’.

Details of the survey

According to the survey, 64 per cent of citizens felt that freedom for political parties to hold rallies had been diminished and 62 per cent believed that the media too was intimidated to criticise the government and hold it accountable. 54% felt not free to air their political views while only 27% said they would be willing to participate in a demonstration on an issue that does not please them.

The main opposition leader, Chadema chairman Freeman Mbowe said the decline in the president’s ratings reflects the hardships that citizens are experiencing.

Magufuli has been accused of cracking down on dissent and freedom of expression since taking office in late 2015.