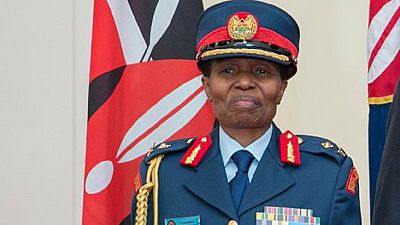 President of Kenya on Friday (July 13) swore into office the country’s first woman Major-General in the person of Fatumah Ahmed. She had barely two years ago made history as the first woman Brigadier-General.

Fatumah, who works with the Air Force, thus became the first woman in the Kenya Defense Force (KDF) to rise to the post in the country’s over five decades of independent rule.

According to military rankings, a Major-General is a general officer ranking above a brigadier general and below a lieutenant general.

The president took the lead in celebrating Fatumah’s feat The president’s social media handles shared photos of the swearing in ceremony.

Most local news portals reported it as a breaking news item whiles Kenyans on social media platform Twitter joined in the celebration. Below are a few tweets in that respect.

FATUMAH AHMED promoted to the rank of Major-General, becomes the highest-ranking woman to ever serve in the Kenyan military pic.twitter.com/5×9HYjhfSg

A big congratulations to Fatumah Ahmed for becoming the first Major General in our KDF.
Hongera sana

Congrats madam General, you have hit it “FATUMAH AHMED”

A big big Congratulations to Fatumah Ahmed as she makes history as the First Woman to become Major General in the Kenya Defence Forces.

A big big Congratulations to Fatumah Ahmed as she makes history as the First Woman to become Major General in the Kenya Defence Forces. This pic was taken on 24th August 2015 when I interviewed her following her promotion to Brigadier. #MajorGeneralFatumaAhmed #WanawakeHoyee