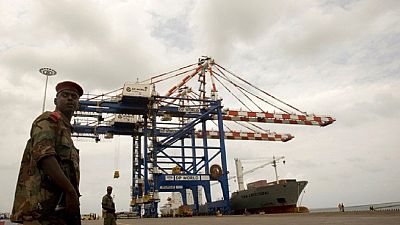 Dubai’s DP World threatened on Thursday to take legal action against China and Djibouti for building an international free trade zone on a terminal disputed with the strategic Horn of Africa nation.

China, which has the only foreign military base near the Red Sea terminal, is developing and financing the free trade zone as it considers Djibouti an important part of its $1 trillion “Belt and Road” global investment initiative.

DP World reserves the right to take all available legal actions, including claims for damages against any third parties that interfere or otherwise violate its contractual rights.

“DP World reserves the right to take all available legal actions, including claims for damages against any third parties that interfere or otherwise violate its contractual rights,” the port operator said in a statement.

The tiny nation of Djibouti overlooks the Bab al-Mandab strait at the mouth of the Red Sea on the key shipping lane through the Suez Canal to Europe from the Gulf and Asia beyond.

In February it terminated a 50-year concession agreement with DP World over the Doraleh container terminal, claiming flagrant violation of state sovereignty and national interests.

Dubai has already sought arbitration in the dispute before the London Court of International Arbitration.

DP World, which operates 78 ports in more than 40 nations, has increased its interest in the Horn of Africa and nearby with contracts to manage ports in Yemen and the breakaway Somaliland.

Djibouti in 2017 unveiled three new ports and a railway linking it to landlocked Ethiopia, as part of its bid to become a global trade and logistics hub.

The trade zone, which is connected to Djibouti’s main ports, aims to diversify the economy, create new jobs and lure foreign investment through tax-free incentives and full logistical support.

The free trade zone is being run by Djibouti, the majority shareholder, along with three Chinese companies.