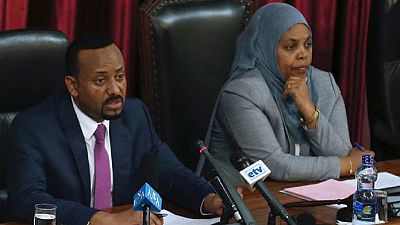 Ethiopia must work harder to attract foreign investment and boost international trade, Prime Minister Abiy Ahmed said on Friday as he pushes a fundamental overhaul of how the nation is run.

With frankness that has become characteristic since he took office in April, Abiy told a parliamentary budget debate the economy grew more slowly than expected in the 2017/18 year and export earnings were falling far short of targets.

“We need to work (so that) investors have full confidence in the country,” he said, adding that the government must be more efficient and prudent in its spending.

We need to work (so that) investors have full confidence in the country.

Abiy is determined to reform Ethiopia

Abiy has launched peace talks with neighbour and sworn enemy Eritrea, lifted a state of emergency and promised to open up the government-dominated economy partially by attracting foreign capital to the state telecoms company and airline. The 41-year-old has also criticised security forces for brutality.

On Friday, he acknowledged that the effort to boost earnings from manufacturing is for now falling short. “We are earning the lowest in the region,” he said of exports from the sector.

The budget forecasts the economy will grow 11 percent in the fiscal year beginning this month.

Though growth has averaged nearly 10 percent for the past decade, starting from a very low base, analysts say the economy is choked by dollar shortages caused mainly by heavy public investment in mega-projects.

Abiy has said foreign exchange shortages would last for years.

The government devalued the birr last year but economists say it is still overvalued by as much as 25 percent and that dollar shortages may deter investment.

“They can try to square the circle by advancing this privatisation process and attracting in foreign capital that way but they will get a lower price for those assets if there are acute dollar shortages,” said Charlie Robertson, global chief economist at Renaissance Capital.

Despite Abiy’s desire for change, the budget contained no major shifts in spending priorities. Parliament approved modest increases in defence and security spending.

Abiy aims to shake up the country after the security-obsessed rule of his predecessors. However, his efforts are attracting opposition from hardliners in the Tigrayan People’s Liberation Front, which has dominated the ruling EPRDF coalition – and the country and economy – for nearly three decades.

Two people were killed in a grenade blast at a pro-Abiy rally in Addis Ababa last month, with blame pointed at those opposed to reform.

Faced with a current account deficit estimated by the International Monetary Fund at $5-$6 billion, Abiy said the government needs $7.5 billion to complete dam, road and rail projects. The budget made no allocations for new projects.

The government will seek $1.2 billion in external concessional loans this year, up slightly from last year. No plans for borrowing from external markets were mentioned.
The yield on the nation’s only Eurobond, issued in 2014, hit a 15-month high of 7.59 percent in June, before Eritrea responded positively to Abiy’s peace overtures.