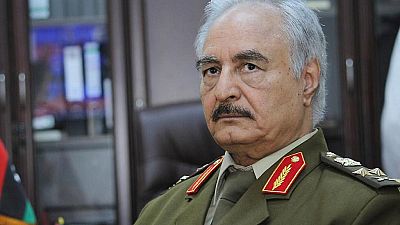 After tightening his grip on eastern Libya, military strongman Khalifa Haftar now wants to extend his influence across the west where the UN-backed unity government is based, experts say.

One of the most powerful players in the Libyan conflict, the 75-year-old field marshal heads the self-styled Libyan National Army (LNA) allied with a rival authority in the east.

He has been bolstered by a string of military victories in eastern parts of the country, which has been wracked by chaos since the 2011 uprising that toppled and killed long-time dictator Moamer Kadhafi.

Barely a week after seizing key oil export terminals from a rival militia, his forces on Thursday announced the “liberation” of Derna, the last eastern city beyond his control, from radical Islamist militias.

Libya: Haftar declares victory in Derna amidst reports of clashes against LNA’s opponents

“The LNA has once again proved its capability to operate on multiple fronts and achieve military success,” said Mohamed Eljarh, chief executive of research firm Libya Outlook based in the country’s east.

Haftar’s enemies are ultimately his biggest advantage, he added.

“With their ill-informed and ill-organised military adventures, they make it easy for Haftar to justify the expansion of the LNA into the western and southern regions,” Eljarh said.

Until 1963, Libya was a federal union divided into three administrative states — Cyrenaica in the east, Tripolitania in the west and Fezzan in the south — fault lines that remain to this day.

In recent years, Haftar — whose forces have been backed by Egypt, the United Arab Emirates and Russia — has repeatedly vowed to “liberate the capital”.

But any push westwards is likely to face resistance particularly from armed groups in the western city of Misrata that are among the country’s most powerful and hostile to Haftar.

Haftar’s “triumphalist declarations on his supposed victory against terrorism suggest that he may be carried away by the recapture of Derna and underestimate the road ahead”, said Karim Bitar, an expert at the Institute for International and Strategic Affairs in Paris.

“Even the external powers that support him sometimes feel that Haftar overestimates his strengths and that nothing will be possible without a political rapprochement”.

Accused by his opponents of wanting to establish a new military dictatorship, Haftar refuses to recognise the authority of the Tripoli-based Government of National Accord (GNA).

His relations with the authorities in Libya have always been complex.

Haftar served under Kadhafi but later fell from grace when he was captured by Chadian troops during Libya’s fruitless 1978-1987 conflict with its neighbour.

He languished in jail until the United States managed to secure his release and offer him political asylum.

He lived in the United States for more than two decades, giving rise to accusations of CIA links, before returning in 2011 to take part in the NATO-backed uprising.

Three years later, he declared war on jihadists in second city Benghazi, prompting Libya’s then-government to accuse him of trying to stage a coup.

An agreement struck in Paris in May between four Libya leaders including Haftar and GNA head Fayez al-Sarraj to hold elections in December has done little to calm tensions.

After Haftar announced he was handing over the recaptured ports to the eastern authorities, the GNA urged the UN Security Council to block any “illegal” oil exports.

“Haftar is arrogant because certain states encourage him by promising him their support,” said Jalel Harchaoui, a Libya expert at The University of Paris VIII.

Haftar’s rivals accuse him of turning his back on the commitments he made in Paris.

“It is hard to see how Libya is capable of holding free and fair elections under current conditions,” said Ethan Chorin, a consultant and former Tripoli-based US diplomat.

“The various negotiating parties do not recognise one another and have limited influence on the ground — Haftar being the notable exception,” he said.

Haftar’s camp insists that its goal is not control of oil but to bring the GNA to the negotiating table.

In particular it wants the sacking of central bank chief Seddiq al-Kabir, whom the eastern authorities accuse of financial support for their rivals.

“Haftar is absolutely determined to weaken the balance around the GNA in Tripoli, not only by military means but also by administrative and economic means,” said Harchaoui.