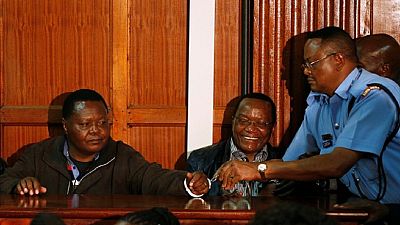 Kenya’s public prosecutor said on Thursday that his office will target banks and their staff for their involvement in the handling of funds lost from a government youth agency.

Kenya has been hit by a new spate of scandals involving bogus tenders and suppliers that allegedly resulted in the theft of hundreds of millions of shillings by state officials from several government bodies.

A court has charged 43 suspects, including state workers and business people, over 1 billion shillings missing from the government-run National Youth Service (NYS) training scheme, with the prosecutor saying half of it had been determined to be fraudulently acquired.

We are also going to go for the tellers and the managers who authorised those huge withdrawals, because our argument is they must have been part of the conspiracy to allow such huge withdrawals.

Authorities are also investigating 10 financial institutions suspected of handling funds that were stolen from the youth service.

Individuals who approved withdrawals to be prosecuted

Noordin Haji, the director of public prosecutions, said his office will also go after individuals found to have facilitated the transactions.

“Very soon, once those investigations are complete, you will see the banks being prosecuted,” he said.

“Not only the banks. We are also going to go for the tellers and the managers who authorised those huge withdrawals, because our argument is they must have been part of the conspiracy to allow such huge withdrawals.”

President Uhuru Kenyatta pledged to stamp out corruption when he was first elected in 2013 but critics say he has been slow to pursue top officials and ministers.

Last month, Haji said that the investigation by his office and the police had revealed that funds were stolen through fictitious invoices and multiple payments on one supplier invoice.

Haji said on Thursday the next phase of prosecutions into the loss of 8 billion shillings ($79 million), will show that at least half of it was dubious and will result in prosecutions for those responsible.

He said the amounts they were investigating could rise if they found that profits was generated by businesses that used the stolen funds.

“The figures might grow or might shrink a little bit. But even before looking at the other aspect that I have told you, probably more than half of the 8 billion (shillings) pending bills are questionable,” he said.