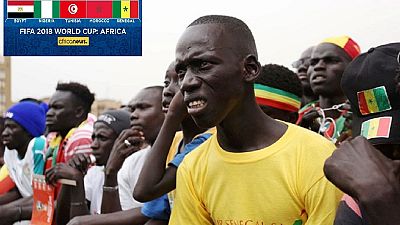 Senegal’s dramatic exit from the World Cup was met with heartache in the capital Dakar on Thursday after the team lost to Colombia, dashing hopes of an African team advancing into the knockout stages.

Senegal, nicknamed the Lions of Teranga, lost 1-0 to their South American opponents, despite being the better side in the first half and having a penalty decision overturned. Senegal lost out on a second spot in the group to Japan because of a worse disciplinary record.

The drums never stopped beating as hundreds of expectant supporters gathered on a muggy afternoon to watch the match live in a palm tree-lined square in Dakar. Vuvuzela-wielding fans scaled trees, walls and scaffolding to watch the big screens.

I don’t know why, but referees do not like African teams.

After their team conceded a goal and then squandered good chances in the dying minutes, the carnival atmosphere gave way to silence and finally the kind of frustration that had been building since Senegal drew with Japan last Sunday, despite twice leading the match.

“We didn’t make the most of our chances. The problem was with the coach. I don’t know why, but referees do not like African teams,” said electrician Elly Sy, the Senegalese flag painted on both cheeks, echoing the litany of grievances voiced in the local press this week.

Senegal followed Egypt, Tunisia, Morocco and Nigeria, all failing to advance past the group stage, meaning no African team has reached the second round for the first time since the 1982 finals in Spain.

The poor showing will no doubt reignite a debate as to why African teams have failed to perform. But before that, there was simple, gutting disappointment.

The Dakar crowd thinned quickly after the match, leaving a few shedding tears in the trash-strewn square. It was a stark contrast to the rowdy celebrations when Senegal beat its former coloniser France in 2002, prompting then-President Abdoulaye Wade to cruise the crowded capital in an open-topped motorcade.