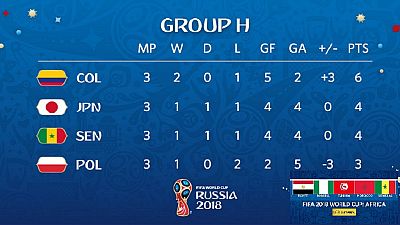 For the first time in football history, a team has been eliminated from the World Cup using fair play points.

African side Senegal, became the victims of the fair play tiebreaker, after they finished level on points with Japan in Group H.

Both Japan and Senegal had scored four goals and equally conceded four goals. When the two teams met in their group clash, the match ended 2-2.

Japan progressed with two fewer yellow cards than the African side.

As teams compete in the group stages, competing for the two available slots in the round of 16, football’s governing body FIFA ranks each team using a two step system.

The first step takes into account number of points obtained, goal difference and goals scored in the group matches.

Pursuant to the criteria listed in art. 32 (5) lit. a) to c) of the Competition Regulations, teams shall be ranked based on;

If two or more teams are equal on the basis of the first step, as happened in the case of Senegal and Japan, then the ranking will be determined by applying to the group matches between the teams concerned using the following criteria.

“Fair Play points are one of the rules and these rules have been established in the tournament regulations; we have to respect that,’‘ said Senegal coach Aliou Cisse after the match.

‘‘We would have preferred to be eliminated in another way but that’s the way it works and we knew that those were the regulations.’‘

The Senegal team of 2018 were thus unable to emulate the Aliou Cisse’s 2002 team that made it to the quarter final, beating defending champions France in the opening game in South Africa.