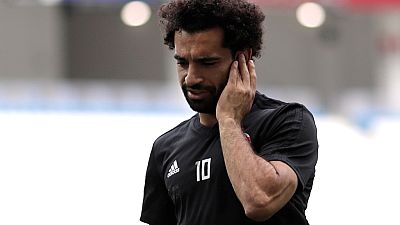 Salah, who scored 44 goals for the Reds last season, is set for an early exit from the finals in Russia after the Pharoahs lost their opening two matches.

The forward scored a penalty in the second game against the hosts, but Hector Cuper’s men were beaten both by Russia and Uruguay.

Mohamed Salah is an honorary citizen of the Chechen Republic! That's right.

They take on Saudi Arabia on Monday, amid suggestions that the 25-year-old could be about to pull out of the national side.

Mohamed Salah is considering quitting the Egypt national team after being drawn into a political row in Chechnya.

Salah so angry at Egyptian FA's use of him he is considering quittinghttps://t.co/BGgyO3UTbC

Salah had expressed shock last week that he was thinking about leaving before the final group match.

But now Salah and his representatives are increasingly unhappy at what they perceive as the Liverpool star being used as a political pawn by the Egyptian FA.

Salah is claimed to be assessing his future, following what has turned into something of a debacle at Egypt’s training base in Grozny, the capital of the Chechen Republic.

Sources have confirmed to IndyFootball that Mo Salah is considering his Egypt future. Relationship with their FA is a major factor https://t.co/VnSM9cdfgC

As Salah looked to regain fitness and shrug off the shoulder injury suffered against Real Madrid in the Champions League final ahead of the tournament, he was pictured walking beside Chechnya leader Ramzan Kadyrov.

Kadyrov, leader of Chechnya since 2004, has been accused of numerous human rights violations, including discriminating against women and persecuting sexual minorities.

On Friday he made Salah an honorary citizen of the Chechen Republic, during a banquet held to say goodbye to the Egypt squad. Kadyrov posed with Salah and Hany Abo Ride, chairman of Egypt’s football federation for pictures.

“Mohamed Salah is an honorary citizen of the Chechen Republic! That’s right!” the Chechen leader wrote in a social media post. “I gave Mohamed Salah a copy of the order and a pin at a celebratory dinner that I gave in honour of the Egyptian team.”

A video of the encounter released by the Russian state-funded news agency RT showed Salah smiling as Kadyrov gave a short speech and pinned a badge bearing the Chechen flag to the Liverpool forward’s shirt. Salah was also given a silver plate and a signed jersey from FC Akhmat Grozny, the football club Kadyrov has renamed in honour of his father.

It has been claimed that Kadyrov is looking to use sport as a means to bolster his image, and that he is using Salah to enhance his reach towards potential allies in North Africa and the Middle East. Kadyrov is looking to further diplomatic relations between the semi-autonomous state over which he rules and foreign governments, while also increasing foreign investment in the republic.

Kadyrov has hit back at such suggestions, telling the BBC: “Everyone has played here, even Maradona at our stadium, but we don’t use this kind of thing for politics. Our enemies are paid to write things like that. I didn’t invite Mo Salah or the Egyptian team. They chose us themselves.”

Mo Salah could quit Egyptian national team, “feels exposed” by the events and doesn't want to be used for Chechnya’s political gain, per CNN https://t.co/reBt9IeSKw pic.twitter.com/UeSG22RtlG

Mo Salah could reportedly quit the Egypt national team after controversy surrounding his involvement with Chechnya during the World Cuphttps://t.co/dncDWcxVdd pic.twitter.com/QcRet1v1mr