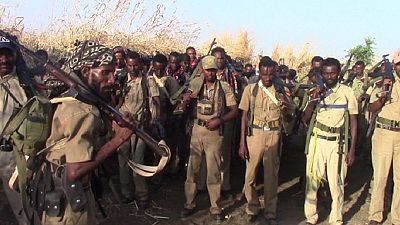 Armed opposition group, Patriotic Ginbot7 (PG7) announced that it has unilaterally suspended all operations using firearms to show its support for the ongoing political changes undertaken by a reformist group within the ruling party, spearheaded by the new Prime Minister Abiy Ahmed.

For the past many years, the Ethiopian people have engaged in a painstaking struggle to extricate themselves from brutal repression and to transition to a democratic order.

In a recent Press Release, the rebel group,  unequivocally stated its strong support for this bold move and pledged to stand with the Ethiopian people and the reformist group leading the change.

“As of June 22, 2018, Patriotic Ginbot 7 has suspended all self-defense operations using firearms in all regions of Ethiopia. Our forces have received strict orders to refrain from any form of armed resistance,” the groups said in a statement.

The group has based itself in neighboring Eritrea in the last few years and insisted its armed operations inside Ethiopia were to defended the people from violence perpetrated by the TPLF regime.

“It has to be noted that the only reason armed resistance became necessary in our country is to defend our people and country from the repression of the Tigray People’s Liberation Front (TPLF) regime that terrorizes its citizens,” the statement said.

Earlier this week, the group, declared that it wants to return to Ethiopia to pursue a peaceful struggle. In a statement confirmed by PG7 leader, Dr. Bernahu Nega, the party said they have been encouraged by reforms undertaken by the new prime minister, Abiy Ahmed.

“This decision to suspend self-defense activities using arms is a self-initiated positive step that takes into full consideration our preparedness and determination to foil any attempt to derail the current change process by anti-change elements within EPRDF. The unilateral step also considers our role in helping, guiding and encouraging the peaceful struggle underway in Ethiopia,” the statement further said.

The group says the steps being taken by the Prime Minister gives “a ray of hope that peaceful transition to democracy is a real possibility” in Ethiopia.

In an address to his supporters in North America, the chairman of PG7, Prof. Berhanu Nega said recently that the new position of reformists within the ruling party, spearheaded by the Prime Minister, was a welcome development.

The Secretary General of the group, Andargachew Tsege was released last month after four years in jail. Tsege gave credited to the Prime Minister for securing his release.

PG7 is one of the political parties that have been banned in Ethiopia by the country’s Parliament. But Prime Minister Abiy Ahmed has recently made calls to opposition groups abroad to give up their arms and come back home to peacefully take part in the country’s politics.

In a speech at the Parliament, Abiy Ahmed said the country can only benefit from peace but not war; and called on Patriotic Ginbot 7 (PG7), the Oromo Liberation Front (OLF) and the Ogaden National Liberation Front (ONLF) to give up arms.