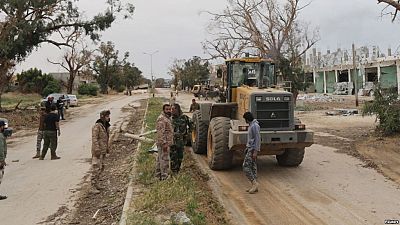 East Libyan forces said on Thursday they had retaken the shattered oil ports of Es Sider and Ras Lanuf, hours after clashes resumed south of Ras Lanuf during a counter-attack by rival factions.

Staff were evacuated from terminals in Libya’s eastern oil crescent and exports were suspended last Thursday when armed opponents of eastern-based military commander Khalifa Haftar stormed the ports and occupied them.

The fate of the ports, two of Libya’s largest, is crucial to the partial, fragile recovery of the country’s oil industry. Their closure has led to production losses of up to 450,000 barrels per day (bpd) from a total national output of little over one million bpd.

Two oil storage tanks had been set on fire since the initial attack, causing damage that the National Oil Corporation (NOC) has said will take years to repair. On Thursday, a third storage tank was set alight sending thick black smoke over Ras Lanuf before the fire was extinguished, a firefighter said.

Haftar, who built up his Libyan National Army (LNA) during his three-year campaign to seize the eastern city of Benghazi, is one of the figures vying for power in Libya since the country fragmented following a NATO-backed uprising in 2011.

He has received increased international recognition since seizing the oil crescent ports in 2016 and allowing the National Oil Corp (NOC) to reopen them, despite his rejection of a U.N.-backed government in the capital Tripoli.

He said Ras Lanuf – which includes a residential town, an air strip, storage tanks and a refinery alongside the oil terminal – had also been taken by the LNA, as rivals had fled to the west and south into the desert, suffering heavy losses.

Military and local sources said clashes had resumed south of Ras Lanuf when the LNA’s opponents counter-attacked, before Mismari asserted that the LNA was again in command of the area by late afternoon.

“The oil crescent is, thanks to God, under full control,” he said, adding later in a press conference that the ports would be handed over the NOC after they had been checked for explosives.

Libya’s national production has been cut to between 600,000 and 700,000 bpd during the oil crescent clashes.

Production at AGOCO, an NOC subsidiary based in the east, has fallen from around 250,000 to 180,000 bpd, an oil official said on Thursday, due to power problems and to disruption at Ras Lanuf.

But as the LNA advanced on the ports early on Thursday, NOC Chairman Mustafa Sanalla said he was expecting a quick restart.

“Libyan production is very low but we are going to resume very soon,” Sanalla told reporters in Vienna. “After a couple of days we will resume, we start our operations hopefully.”

The NOC has blamed the attack on the terminals on militias led by Ibrahim Jathran, who blockaded oil crescent ports for several years before losing control of them in 2016.

The LNA has said the Benghazi Defence Brigades – a coalition of anti-Haftar fighters that previously tried to advance on Benghazi and seized Ras Lanuf and Es Sider for 10 days in March 2017 – were also involved. Both sides have drawn on mercenaries recruited from southern Libya, Chad and Sudan.

Jathran, who is from the oil crescent region, said he attacked the ports last week to “overturn injustice” against local residents by the LNA. The LNA was accused of abuses and mass arrests after using tribal alliances to win the ports.

Haftar is the dominant figure in eastern Libya, aligned with a government and parliament based there since 2014. Backed by regional allies including Egypt and the United Arab Emirates, he has controlled Benghazi, which lies northeast of the oil crescent, since late last year. (Additional reporting by Shadia Nasralla in Vienna. Writing by Aidan Lewis; Editing by Janet Lawrence, David Stamp and Jan Harvey)