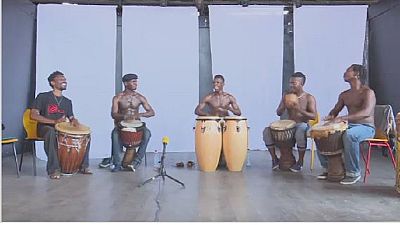 Overcoming barriers and uplifting the value of African culture. This was the inspiration of the Nsangu Ndji Ndji festival which took place from Wednesday, June 6 to Sunday, June 10, 2018 in Pointe-Noire, in the Republic of Congo.

Artists from West and Central Africa lit up the stage with various shows; music and theatre were celebrated during this 14th edition of the festival.

Malian women troupe, Anw jiGi’art grabbed the audience’s attention with the French play Antigone through which they deplored the abuse of power in Africa.

“All we are striving to convey to our leaders is saying we voted for you, we elected you and put you in power so that you become the voice of the people and not to do with us what you want. So that’s why we put this play together to show that dictatorship still exists, comedienne Assitan Tangara explained.

African artistes have a mandate

African artistes, through their work, make themselves the voice of the people to condemn sensitive issues on which public opinion is sometimes repressed.

The organisers of Nsangi Ndji Ndji believe that such events are a building block and hope thay serve as an example to talents who still do not believe in the impact of their creative works.

“We try to find those who have the cultural mindset, who work in the direction of cultural promotion. Those are the ones we ar einvolving at the moment because cultural patronage is sensitive to these kinds of issues,” Pierre Claver Mabiala, director Nsangu Ndji Ndji festival explained.

Doing it for the passion

The Doundouba group fits this description. The group comprised of youthful men – most of them in their twenties – who are passionate about percussion, did not hesitate to venture into this demanding field.

Even with the pressures facing the African cultural sector, the drummers remain committed. For them, there is no turning back.

“I can’t mention everything I have obtained thanks to the djembé (a type of African drum). It has given me many opportunities, pleasure, and has allowed me to expand my professional network. I will play the djembé until I die,” enthused Mohammed Sylla, a drummer in Doundouba group.

The desire for a free environment for artistes

But even as the glory of the performances at the festival rose high in the sky, some artistes were still not content. There is still a disconnect between the artistes and audiences factored with chocking political environments.
This has forced artistes “to go to the people and perform in their homes,” comedienne Diana Honoraire intimated.

With that in mind, the various shows of the Nsangu Ndji Ndji festival were therefore an opportunity for the public to reconnect with the African performing arts.

“I figured it is not just rap or rumba. There are many things such as plastic arts and theatre. For me it is an open discovery,” said a guest at the festival.

Apart from the abundant natural wealth which is the envy of many, Africa harbours true artistic and cultural treasures which are only waiting to blossom.