Salah's Egypt arrive in Russia, ahead of opener against Uruguay 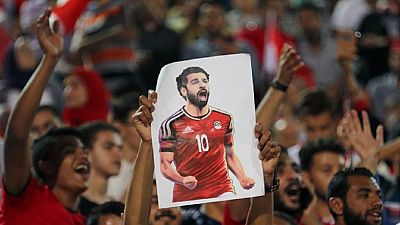 Egypt’s national team arrived in Russia led by their star player, Mohamed Salah, on Sunday ahead of their first match against Uruguay on Friday.

The Egyptian delegation had been cheered by their fans at a final training session on Saturday night in the capital Cairo, before flying to the Grozny International Airport in Russia.

Fans who wished the players and coaching staff farewell, assured the national team of their support and sent them off to Russia with the message: “When You Say the Pharaohs, the world must get up and listen.”

We’re strong as a group, we all have the same objective, which is to win and that’s the most important thing.

Liverpool forward, Salah, who is instrumental in the Egyptian set up did not participate in the training, but says he is confident that he will play role in the game against Uruguay.

“Now I’m feeling better,” Salah told the Spanish daily. “I’m hopeful of being able to play in our first game, but this will depend on how I feel when the day comes around.”

The 25-year-old has not played since he injured his righ shoulder in the first half of Liverpool’s 3-1 defeat to Real Madrid in last month’s Champions League final.

Salah, who scored 44 goals for Liverpool this season, spent around 45 minutes walking round Cairo’s national stadium in front of around 2,000 supporters but did not train with the rest of the squad.

The Pharaohs will take on the South American nation, before meeting the hosts Russia on June 19 and Saudi Arabia on June 25.

Can Egypt win without Salah?

Salah believes the team has got what it takes to get past the group stages.

“We’ve got a great team and a great coach. We want to get into the next round and do things well there,” he added.

He also attempted to downplay the effect of his absence on the performance of the team. Egypt has struggled to get results in games that did not feature Salah including a 2-2 draw against Kuwait in May, a goalless draw against Colombia and a 3-0 defeat to Belgium in June.

“We’re strong as a group, we all have the same objective, which is to win and that’s the most important thing. We don’t just have one strong point, but the main thing is we play together as a group.

Egypt last played at the World Cup 28 years ago, where they exited at the group stages after draws with Netherlands and Republic of Ireland and a 1-0 loss to England.