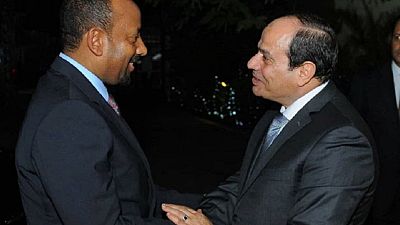 <p><strong>Ethiopia’s prime minister has held bilateral talks with his Egyptian counterpart, securing the release of Ethiopian prisoners held in the North African nation.</strong></p> <p>Abiy Ahmed who is in Egypt for a two day state visit, held a meeting with president Abdel Fattah el Sisi and the two leaders agreed to elevate their countries’ relationship to a strategic level of mutual trust, cooperation and support.</p> <p><img src="https://static.euronews.com/articles/47/75/477503/1024x576_bonus-start.jpg" alt="" /></p> <p>The chief of staff in the office of the Ethiopian prime minister, Fitsum Arega said the two leaders also reiterated their commitment to set up a joint fund for infrastructure development.</p> <blockquote class="twitter-tweet" data-lang="fr"><p lang="en" dir="ltr">In this spirit of brotherhood, the two leaders affirmed their commitment to set up a joint fund for infrastructure development such as energy. <a href="https://twitter.com/hashtag/Egypt?src=hash&ref_src=twsrc%5Etfw">#Egypt</a> also freed all Ethiopian prisoners during the visit of HE PM Dr Abey Ahmed & they will travel to <a href="https://twitter.com/hashtag/Ethiopia?src=hash&ref_src=twsrc%5Etfw">#Ethiopia</a> (2/2). <a href="https://t.co/pQoCJQhFe2">pic.twitter.com/pQoCJQhFe2</a></p>— Fitsum Arega (@fitsumaregaa) <a href="https://twitter.com/fitsumaregaa/status/1005910753176670208?ref_src=twsrc%5Etfw">10 juin 2018</a></blockquote> <script async src="https://platform.twitter.com/widgets.js" charset="utf-8"></script> <p>Egypt has lately been concerned about the effect that an Ethiopian dam being built on the Nile river would have on water flowing to its fields downstream.</p> <p>The two countries, together with Sudan recently agreed to create a <a href="http://www.africanews.com/2018/05/17/ethiopia-meeting-diffuses-tension-over-dam-project-leaders-to-meet-every-6/"target="_blank">scientific committee</a> dedicated to the Grand Ethiopian Renaissance Dam.</p>