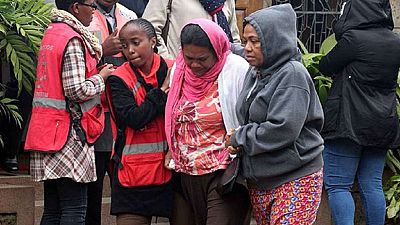 Anguish, disbelief and tears prevailed at Lee Funeral Home as the bodies of the victims of the air crash victims were identified by friends and relatives .

On a gloomy Friday morning in the city, and in a chilly weather that seemed to resonate with the grimness of the moment, family members identified the bodies of the ten victims who were involved in the Tuesday evening air crash in the Aberdares.

A relative who did not wish to go on record so as not to be seen to contradict other family members described the state of the bodies as “horrific and traumatising”.

It’s hard to believe that that my son is gone. Wafula was barely thirty years and was well schooled (he had a Master in accounting). He had a great business acumen and was very determined to succeed.

All the ten bodies of the victims were positively identified by their relatives in the exercise that lasted for more than four hours.

Chief Government Pathologist Dr Johansen Oduor led the team of pathologists who conducting autopsies on the bodies of the crash victims.

One by one, families were taken to the morgue’s viewing bay to identify their relative, from which cries of disgust would burst upon seeing the horror in which their family member had died.

Not even the lengthy counselling session offered by a team led by officers from the Kenya Red Cross during the action-packed session was enough to comfort the anguished and traumatised families.

Those who perished in the accident are crew members Captain Barbara Wangeci and First Officer Jean Mureithi.

With deep anguish, most of them narrated how they had bid farewell to family members who were full of life only moments earlier as they took the flight from Kitale heading to Nairobi.

Their hopes to see them again would be dashed when they learnt about the crashed light aircraft in the dense Aberdare Forest.

Now seeing their bodies lie on the icy morgue stretchers, lifeless and badly mutilated, was too much to bear for some of them who wept their hearts until they could cry no more.

The family of Ronald Wafula described him as a hardworking young man.

While Wafula’s father Eric Wafula Wanyonyi had an unmistakable look of defeat on his face, his mother was inconsolable, a spectacle which all but told of the height of grief of losing their firstborn son.

“It’s hard to believe that that my son is gone. Wafula was barely thirty years and was well schooled (he had a Master in accounting). He had a great business acumen and was very determined to succeed,” said Mr Wanyonyi, who is Turkana County deputy county commissioner.

“I had invested so much in my son and I had so much in hope in him to succeed. This tragedy is deeply shocking for me and the entire family,” Wanyonyi added.

Mr Wanyonyi also appealed to the government to speed up investigations to reveal what transpired during the flight leading to the accident.

Had Ali Abdi Ahmed had his Iftar in Kitale as requested by his cousin Abdikadir Noor, he may have avoided travelling in the ill-fated aircraft.

“I had asked him to delay his flight and break his fast with us in Kitale before flying to Nairobi, but he declined saying he had several activities scheduled for that evening in Nairobi and had to fly early,” Mr Noor said.

“We even prayed together that midday at the mosque in Kitale before he left for the airstrip,” Noor added, saying that he was shocked to learn that the aircraft had plunged at Elephant Pit in Aberdare forest.

Abdi Ahmed, 40, operated a chain of businesses in Kitale and Kapenguria, among them petrol stations, hardware and general merchandise stores.

According to his family, Kabara Waweru, another of the crash victims met his death while travelling to Nairobi to renew his passport.