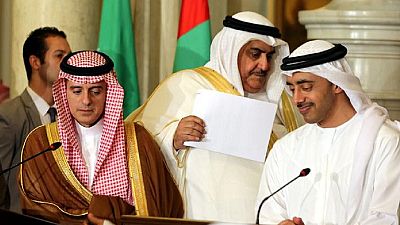 The International Crisis Group (ICG) has warned that the ongoing geopolitical fight between the Gulf states of Qatar and United Arab Emirates (UAE) is threatening to further destabilise Somalia.

In June 2017 Gulf crisis, Saudi Arabia, the UAE and a number of allies severed diplomatic relations with Qatar, imposing an economic blockade on the country accused of financing terrorism to destablise the region.

The group notes that the Somali federal government’s decision to take a neutral stance in the rivalry has not been received well, especially by UAE.

As Mogadishu-Abu Dhabi relations unravel, those disputes, which pit the Farmajo government against rival factions in Mogadishu and against federal states and Somaliland, could escalate.

UAE which recently had a public diplomatic spat with Somalia, when the latter confiscated bags of cash worth $9.6m at the airport in Mogadishu. The bags were aboard a plane that had been chartered by the Emirati diplomats who refused to be subjected to routine security checks.

ICG believes that intra Somali disputes have been magnified as UAE ups its support to Somali’s regional states, in retaliation to the row with the federal government and its perception of a close relationship between Somalia and Qatar.

‘‘As Mogadishu-Abu Dhabi relations unravel, those disputes, which pit the Farmajo government against rival factions in Mogadishu and against federal states and Somaliland, could escalate,’‘ reads part of the statement.

Somalia’s president Mohamed Abdullahi Farmajo recently called for an end to ‘senseless killings’ that have claimed dozens of lives as Puntland Somaliland fight over a disputed town.

Recommendations for Somalia and UAE

The IGC shared recommendations to prevent the Gulf Crisis from sabotaging local and international efforts to bring stability to the restive country.