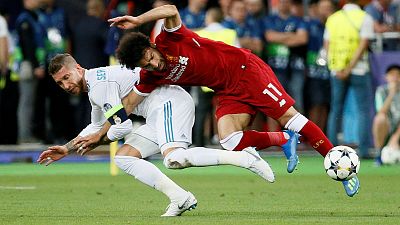 Real Madrid defender Sergio Ramos has brushed off allegations that he deliberately injured Liverpool forward Mohamed Salah in last month’s Champions League final, saying he is being unfairly painted as a pantomime villain.

Salah injured shoulder ligaments in a collision with Ramos in Kiev, which led to the Egypt international leaving the pitch in tears in the first half.

Ramos was subsequently targeted for online abuse for his perceived role in Salah’s injury by angry Egyptian fans.

“Bloody hell, they’ve given this a lot of attention, the Salah thing,“ the Spain international told Spanish newspaper AS.

“I see the play well, he grabs my arm first and I fell to the other side, the injury happened to the other arm and they said that I gave him a judo hold.”

The 32-year-old added that he had messaged Salah and said the Egyptian could have played on if he had taken a pain-killing injection – something Ramos himself has done in the past.

Liverpool lost the final 3-1, allowing Madrid to seal their third Champions League title in a row.

However, two of Madrid’s goals came from blunders by Liverpool goalkeeper Loris Karius, who it later emerged had suffered a concussion during the match, according to a specialist who analysed him in the United States.

Karius clashed with Ramos early in the second half and was seen holding the side of his head after the collision, which was before he made the mistakes that led to the goals.

The suggestion that Ramos had caused Karius to suffer a concussion did not go down well with the Spaniard.

“After, the goalkeeper said that I dazed him with a clash,“ Ramos added. “I am only missing (Roberto) Firmino saying that he got a cold because a drop of my sweat landed on him.“