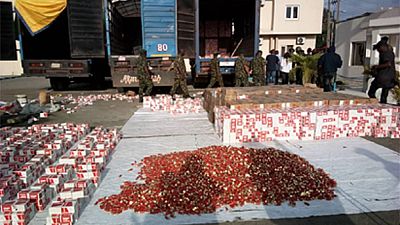 According an official, the consignment is believed to have come from Benin Republic but that authorities were yet to ascertain their destination.

The incident occured in a town located in the southwestern Ogun State. Occupants of the vehicles fled after they were stopped, security forces are currently on their trail, Brigadier general Olaniiyi Olatunde told pressmen.

The cartridges were contained in boxes concealed in a way that it will be difficult for any usual patrol or checkpoint to discover.

Media reports indicate that the ammunitions were concealed in an in-built compartment of the trucks. Adding that the soldiers only discovered the arms after they had removed the in-built boards.

The army confirmed that the success of the operation was largely due to cooperation by members of the public who volunteered information.

”Following calls received from well-meaning Nigerians, our patrol teams in Anti Smuggling, Anti Pipeline Vandalization, on 30th May, 2028, at about 2.58 am, in conjunction with the Police, State Security Service, SSS, Nigeria Security and Civil Defence Corps and other well-meaning Nigerians , intercepted the trucks loaded with cartridges at Balogun village, at Agbogila road, Ilara road.

“The cartridges were contained in boxes concealed in a way that it will be difficult for any usual patrol or checkpoint to discover.

“When our troops stopped them for stop and search, the occupants took to their heels . We pursued them but didn’t get any of them. Troops are still on their trail,” he said.

Nigeria’s security mix is complex as government continues to battle remnants of Boko Haram in the northeast. In the middle belt, communal clashes have left thousands dead whiles the north also suffers from kidnappings and cattle rustling.

Until late last year, the southeast was also heated as the army was deployed to deal with Biafra separatists. The southsouth and southwest have largely remained peaceful over the years.