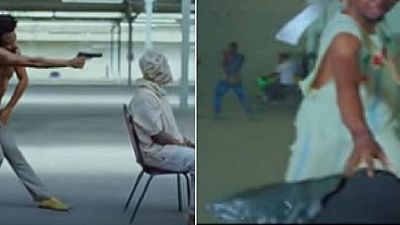 Nigerian pop star Folarin ‘Falz’ Falana has been praised for his latest music video titled ‘This is Nigeria’, that highlights several issues affecting the Nigerian people.

The video, is executed in a style to that of American artist Childish Gambino’s viral video ‘This is America’.

In ‘This is America’, Gambino highlighted issues of discrimination against African Americans and gun violence.

In ‘This is Nigeria, Falz highlights issues of Boko Haram’s kidnapping of girls and government’s slow response, drug addiction among the youth, corruption, conmen masquerading as pastors and the society’s preoccupation with reality TV shows among others.

Both videos had the desired viral effect with ‘This is Nigeria’ which was released on Friday raking up over one million views on YouTube in less than 72 hours.

Sending love to Nigeria. So many great, beautiful artist changing the game!!!! ???? ✊? falzthebahdguy

The cinematographer of ‘This is Nigeria’, Tayo Aina confirmed the inspiration taken from ‘This is America’.

‘‘The whole video was done in 3 one-take scenes. It’s very similar to Childish Gambino’s “This is America” but this time reengineered to cover the issues we face in Nigeria as a people, From drug addiction to lack of stable electricity and a lot more,’‘ Aina said while releasing a behind the scenes video of the project.

‘This is America’ is a 4 minute one take music video.

Falz, who is the son of popular Nigerian lawyer and human right activist Femi Falana, is no stranger to doing conscious music. He has previously called out the glorification of internet fraud in Nigerian music.

This is Nigeria Vs This is America