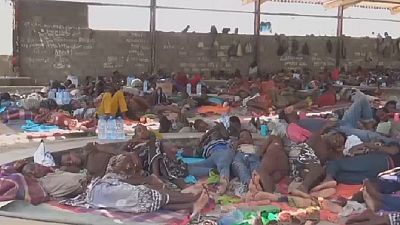 International humanitarian organization, Doctors without borders says it is concerned about the fate of hundreds of migrants and refugees, including women and children being held in a dangerously overcrowded detention centre in Libya.

The organization says many have been held for more than five months in the port city of Zuwara, some 100 kilometers in western Libya.

We strongly urge all international agencies with a presence in Libya, representatives from countries of origin and the Libyan authorities to do everything they can to find a solution for these people over the next few days.

The group says these people are kept in inhumane conditions without adequate food or water, adding that more than 500 people have been detained in the past two weeks alone, far exceeding the centre’s capacity.

On May 1, the United Nations Refugee Agency (UNHCR) airlifted 88 people in need of international protection out of Zuwara. They were taken to a detention centre in Tripoli with a view to identifying the most vulnerable cases for potential evacuation abroad.

The Libyan authorities have transferred some people to other detention centres in an attempt to reduce the extreme overcrowding and the International Organization for Migration has initiated a process of “voluntary humanitarian return” for some detainees. However, hundreds of people remain trapped inside the detention centre in Zuwara with no solution in sight.

The group is strongly urging all international agencies in Libya, representatives from countries of origin and the Libyan authorities to do everything they can to find a solution for these people over the next few days.