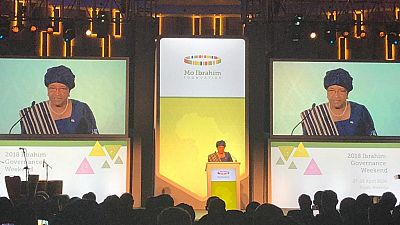 Liberia’s former president Ellen Johnson Sirleaf has spoken publicly for the first time about what she intends to use her time for as she settles into life after presidency.

The former Nobel Prize laureate and Africa’s first democratically elected woman president said she was going to continue with issues of women empowerment whiles advancing the cause of good governance across Africa.

“I will work with a small team of people to establish the Ellen Johnson Sirleaf Presidential Center for Women and Development, designed to support women as agents of change, makers of peace, and drivers of progress,” she said at a ceremony in the Rwandan capital, Kigali.

The event was the leadership ceremony of the Mo Ibrahim Foundation which awarded her the $5m Mo Ibrahim Ibrahim Prize. Sirleaf in her address to participants at the 2018 Ibrahim Governance Weekend stressed on a range of topics from global, continental and local prospects and challenges.

She spoke at length about her “restless” journey in search of a route to serve her people which search she said led her to civil service and eventually to the office of the highest civil servant of Liberia for the past 13 years.

She reiterated the successes and challenges that she experienced and what lay ahead for the country she continually referred to as “complex, post-conflict society, on a continent of uneven progress, during a time of global uncertainty.”

Sirleaf’s political progress has been hinged on the support of Liberian women as laid out in her biography, “This Child Will Be Great.” In many parts of the book she credited the efforts of women groups in organizing support for her political campaign.

Present at the event were head of the award foundation Mo Ibrahim, Rwandan president Paul Kagame and his Ivorian counterpart Alassane Ouattara. Former Ethiopian Prime Minister Hailemariam Desalegn as well as members of the Foundation’s award committee were all present.