Kenya’s economy is expected to rebound to 5.8 percent growth in 2018 after electoral uncertainty and drought cut last year’s expansion to the lowest level in more than five years, Finance Minister Henry Rotich said on Wednesday.

The economy will benefit from increased investment in key areas like manufacturing, farming, housing and healthcare, he said.

President Uhuru Kenyatta won re-election in November in a second vote after the first in August was annulled by the Supreme Court citing irregularities. Around 100 people, mainly opposition supporters, were killed mainly by police during the prolonged election season.

We expect growth to recover to 5.8 percent in 2018 and over the medium term the growth is projected to increase by more than 7 percent.

“Despite the slowdown in 2017 our outlook is bright,” Rotich said at the launch of the annual economic survey.

“We expect growth to recover to 5.8 percent in 2018 and over the medium term the growth is projected to increase by more than 7 percent.”

Growth slowed to 4.9 percent last year from a revised 5.9 percent in 2016, the statistics office said.

Rotich said the projected economic rebound is supported by favourable economic fundamentals including inflation, which has dropped to about 4 percent this year.

“The ongoing investments in infrastructure, improved business and factory confidence and strong private consumption are expected to support growth,” he said.

Kenya’s diversified economy is better able to withstand shocks like the commodity price drop that started in 2014 and hit oil-producing African countries such as Nigeria and Angola.

But its economy was hobbled by a severe drought in the first quarter of last year that was followed by poor rainfall. 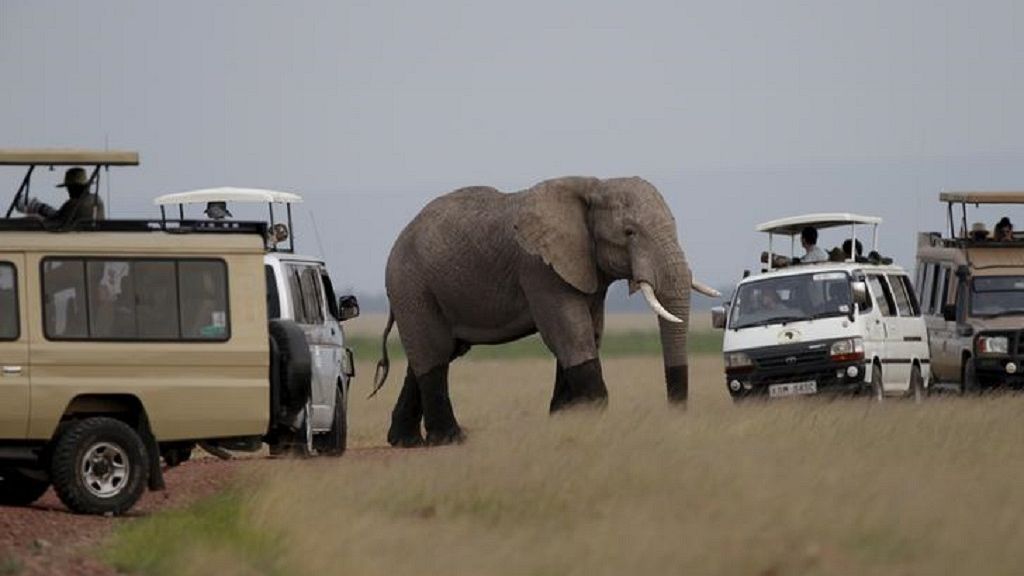 An elephant walks in front of tourists in Amboseli in National park, Kenya

The services sector including tourism grew strongly last year and that helped to offset the slowdown in farming and manufacturing, said Zachary Mwangi, director general of the Kenya National Bureau of Statistics.

Tourism is vital for hard currency and jobs and grew 14.7 percent while earnings surged 20 percent, he said.

In contrast, growth in the agriculture sector, which accounts for close to a third of overall output, slid to just 1.6 percent in 2017 from 5.1 percent the year before.

The government says manufacturing is a priority due to its potential to create jobs and it grew at 0.2 percent last year from 2.7 percent the year before.

Production of cement, sugar and processed milk slid as firms reeled from the impact of the election and high costs.