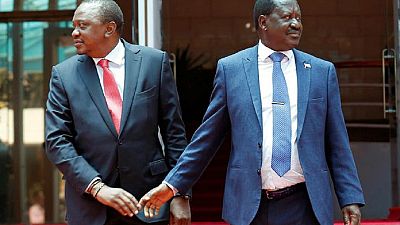 Kenya’s opposition leader has said the attack on the judiciary by the interior cabinet secretary, Fred Matiang’i goes against the spirit of the deal he made with president Uhuru Kenyatta.

Matiang’i on Tuesday, while appearing before the Parliamentary Committee on Administration and National Security, said some judges, activist lawyers and civil societies are working to embarrass and intimidate the government.

He had been summoned by parliament to explain the detention and deportation of vocal opposition lawyer, Miguna Miguna.

In our statement to the nation, President Kenyatta and I urged every leader and every Kenyan to embrace the responsibilities they know to be theirs and help the nation reconcile and make progress.

In a statement, Odinga said Matiang’i’s rant against the judiciary was wrong, arguing that he should have instead appealed decisions he was not happy with.

“As a cabinet secretary of this republic, this outburst by Dr. Matiang’i was highly irresponsible and reckless. In our statement to the nation, President Kenyatta and I urged every leader and every Kenyan to embrace the responsibilities they know to be theirs and help the nation reconcile and make progress,” said Odinga.

After the March 9 deal sealed with a handshake on the steps of Harambee House, Odinga says he and President Kenyatta had agreed to respect the rule of law and champion reconciliation across the country.

“We have just come from the longest, most dramatic political period in Kenya’s history. Every leader should know that and should behave and talk in ways that will help Kenyans re-focus on the problems we have in a sober and rational manner rather than worsen them. The politics and leadership of chest-thumping, fear mongering, hate and division must end in Kenya,” he said.