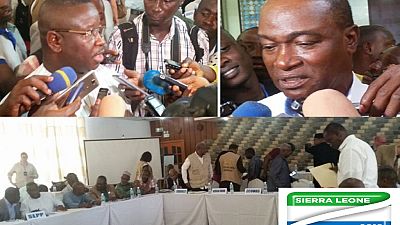 The National Electoral Commission (NEC) in Sierra Leone has resumed the tallying process after coming to an agreement with the political parties contesting the presidential race.

The ruling All People’s Congress party (APC) and the opposition Sierra Leone People’s Party (SLPP) had earlier caused the halting of the process, because of failure to agree on which system to use to collate the results from polling stations.

While APC was conformable with entering the results into Microsoft Excel sheets for collation, SLPP insisted that the existing manual tallying system was foolproof and should be maintained.

After mediation by several observer groups including the African Union, Commonwealth and ECOWAS, the parties agreed to employ a blend of the existing system and the Excel spreadsheets.

In a statement issued by NEC, it was agreed that the results will be entered into the reconciliation and results forms as mandated by the law. The results shall then be entered into an Excel spreadsheet that will be used by NEC in the compilation of final results.

Soon after the resumption of tallying by the electoral commission, SLPP held a press conference where it told journalists that according to their own tally center, its candidate, Julius Maada Bio was leading with 54% against APC’s Samura Kamara.

NEC has repeatedly asked Sierra Leoneans to disregard any provisional results declarations by any parties other than the electoral commission itself.