In Kinshasa, capital of the DRC, at the agency of the National Lottery Company, on the outskirts of the metropolis, you will find betters men and women without distinction meeting almost every day.

And yet for decades, sports betting remained a man’s business. But today it has to be said that the mix is effective in the halls of the country.

Some women dream of becoming millionaires thanks to this hobby based on matches in various football leagues.

“I win every now and then. I bought everything in my house. Once I missed making millions, it was my own fault. My husband told me to play, I neglected. When the winner was announced, I regretted it immensely,” says Nadine Mpolesha, a gambler.

“I’m looking to win the highest Jackpot. I also have children, and one day I would like them to travel and settle outside the country. At my age, if I make a lot of money, I’m going to run a business that makes big money,” another gambler Veronique Mamu says.

Kinshasa’s gamblers are mostly elderly people, women running small businesses, public sector agents and other government officials who have their habits in this very popular activity on the continent.

According to local journals, betters can gain sums going from 3 to millions of dollars.

While Africa is still touted as a poor continent where up to 40 percent of people live below the poverty line, our continent is also fast emerging as one of the most promising and lucrative markets for sports betting.

Betting businesses in the US and Europe like Big Free Bet are expanding into Africa as they position themselves to tap into an explosive growth opportunity for sports betting on the continent. 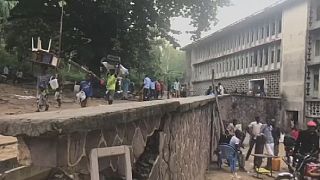 DRC police orders student out of Kinshasa campus over unrest

DRC police orders student out of Kinshasa campus over unrest