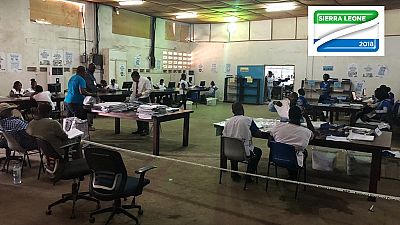 The NEC statement of March 8, 2018; signed by Chairman Mohamed N’fah Alie-Conteh also reiterated that it was the constitutionally mandated body that is responsible to deliver election results and is the only authority in doing so.

The electoral body called for patience and continued commitment to peace as it continued to receive results and tabulate them.

As part of our continued coverage, we explore the post vote process as presented by NEC.

Meanwhile, an observer group is projecting that thepresidential vote is likely to enter a run-off. According to the National Elections Watch (NEW), figures from their Prallel Voter Tabulation (PVT) process shows that none of the 16 candidates will get the 55% needed for an outright win.

In some major uppdates on the process, two opposition parties, the Coalition for Change (C4C) and National Grande Coalition (NGC) have raised concerns over the process saying their representatives had been evicted from voting centers during counting.

An attempt to search offices of the main opposition Sierra Leone Peoples Party (SLPP) raised tensions as police and supporters clashed. The situation was calmed by head of Commonwealth Observer Mission and ex-President of Ghana, John Dramani Mahama.