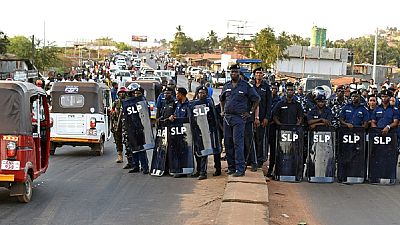 <p>Cast: Sierra Leone police plus riot unit, main opposition Sierra Leone People’s Party (<span class="caps">SLPP</span>) led by former military Head of State Julius Maada Bio, former president of Ghana, John Dramani Mahama, the media.</p> <p>Shortly after polls closed in Sierra Leone’s March 7, 2018 general elections, police <a href="http://www.africanews.com/2018/03/07/sierra-leone-elections-police-raid-offices-of-main-opposition-candidate/" target="_blank">attempted to raid <span class="caps">SLPP</span> offices in Freetown.</a> They were prevented from entry and a riot police reinforcement followed.</p> <p>According to reports by a Reuters / <span class="caps">BBC</span> journalist covering the polls, Umaru Fofana, head of police intelligence unit, Mohamed Kamara, said they’d gone to search the premises on allegations that there was some hacking of the election.</p> <p>Fortunately, head of Commonwealth Observer Mission and former president of Ghana, John Dramani Mahama was on hand to as Fofana put it, ‘diffuse a volatile situation,’ at a time the police had surrounded the <span class="caps">SLPP</span> premises.</p> <blockquote class="twitter-tweet" data-lang="en"><p lang="en" dir="ltr">Former Ghanaian President and head of the Commonwealth election observer mission to <a href="https://twitter.com/hashtag/SierraLeone?src=hash&ref_src=twsrc%5Etfw">#SierraLeone</a> John Mahama has defused a volatile situation. Police had surrounded the office of the main opposition leader Julius Maada Bio where he and his team were monitoring the elections…</p>— Umaru Fofana (@UmaruFofana) <a href="https://twitter.com/UmaruFofana/status/971502697907138560?ref_src=twsrc%5Etfw">March 7, 2018</a></blockquote> <script async src="https://platform.twitter.com/widgets.js" charset="utf-8"></script> <p>But for Bio and his team, they have shrugged off the hacking allegations saying the move was an intimidation antic. They have also stressed the right to collate their results independently.</p> <p>A government spokesperson, however, intimated that the action of the police should be seen as purely a security matter because they are state officers and not party political assigns. Hence the ruling All Peoples’ Congress (<span class="caps">APC</span>) cannot be drawn into the raid. </p> <p>Maada Bio is contesting his second consecutive time for the presidency. He lost the first attempt to outgoing Ernest Bai Koroma in 2011. His main opponent is <span class="caps">APC</span>’s Samura Kamara – a former foreign affairs minister and career politician.</p> <p>The National Electoral Commission (<span class="caps">NEC</span>) is also on record to have stated that their system cannot be hacked because it is basic and manual. Unlike in other countries were electronic transmission of figures is used to collate votes.</p> <p><span class="caps">NEC</span> chairman, Mohamed Conteh has also called for patience as the results of the process could take days to be announced. </p> <p>“Results require several days to tally. Please be patient. The only true certified results are the ones that I will announce on behalf the National Electoral Commission,” he told the press after polls closed.</p> <iframe src="//embed.scribblelive.com/Embed/v7.aspx?Id=2745603&ThemeId=19714" width="100%" height="1200" frameborder="0"></iframe>