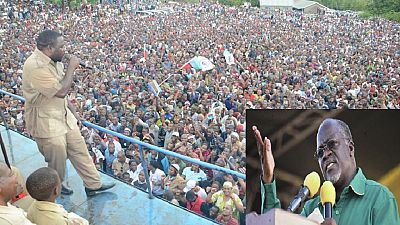 A Tanzanian legislator has been handed a five month jail term for defaming President John Pombe Magufuli in a ‘hate speech’ delivered while addressing a rally on December 30, last year.

Mbilinyi, who is a member of the leading opposition party in Tanzania, Chadema, was sentenced along with the party’s secretary for the Southern Highland Zone, Emmanuel Masonga.

The opposition politicians were charged on January 16 this year and prosecution produced five witnesses and an audio exhibit that was said to have been recorded by the fifth witness, a police officer.

At the time of their arrest, police said they were being questioned because police saw their utterances about killings of people whose bodies were then disposed of in polythene bags and tossed into the sea, as ‘sowing hatred between the public and the government.

The popular legislator had earlier told his supporters to remain calm, even as security was beefed up at the court anticipating possible crowd trouble.

Sugu is one of few musicians that have successfully made the switch from the stage to the August House, counting among his peers fellow Tanzania rapper, Professor Jay a.k.a. Joseph Haule, Uganda’s Bobi Wine a.k.a Robert Kyagulanyi and Kenya’s Jaguar a.k.a. Charles Njagua Kanyi.

Sugu has always been critical of the government, including during his music days with his hit ‘Mikononi mwa Polisi’ calling out police brutality.

He has twice been elected to represent the people of the Mbeya Urban constituency since joining politics.

In the 2015 general election, Sugu was elected by the highest number of voters out of all the 264 elected Tanzanian legislators, garnering 108,566 votes out of a possible 166,256 votes.

The verdict was criticised on social media, with many describing Magufuli’s regime as increasingly dictatorial.

What magistrate is ever going to rule against MagufuliJP? His regime increasingly more dictatorial, threatens human rights and access to law in Tanzania https://t.co/lqDibd7VMy

I'm really not surprised you're hated Magufuli you are a bully!!!! magufulimustgo!!! https://t.co/RJhRPax36p

Hon. Joseph Mbilinyi (Sugu) & Masonga will go down in history as Comrades who truely championed the freedom of expression in #Tanzania .