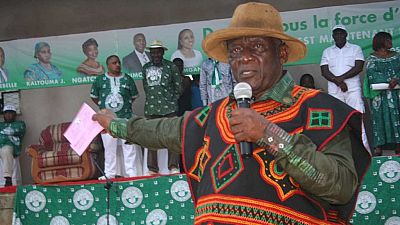 The national chairman of the main opposition party in Cameroon, Ni John Fru Ndii, has declared that he will ‘not be presenting his candidature for the 2018 presidential elections’.

The veteran politician founded the Social Democratic Front (SDF) in 1990 and has led the party since then.

Speaking at the special congress of the party held in Bamenda, 77 year old Ndii reportedly said he was leaving the stage for the younger generation.

I will not present my candidature for the Presidential election, I want you to chose who is best to be the flag bearer.

“I will not present my candidature for the Presidential election, I want you to chose who is best to be the flag bearer,” Ndii tells the congress

Ni John Fru Ndi, chairman of the opposition Social Democratic Front (SDF): I will not be presenting my candidature for the 2018 Presidential Elections #Cameroon pic.twitter.com/VLR0UK7giz

Ndii has recently been embroiled in a war of words with secessionists in the Anglophone region who wanted the SDF congress moved from Bamenda to Yaounde.

Ndii maintains that he is an Anglophone citizen who is not pro-secession.

Analysts will now watch whether 49 year old Joshua Osih, who is currently the deputy of the party, will now seek to be nominated as the party’s presidential flag bearer.

Electoral activities ahead of the presidential election , have already started, and the opposition party recently met in the restive Bamenda region and declared that it would participate in the March 25 senatorial polls.

President Paul Biya is expected to seek another term in office after over three decades in charge of the Central African nation. The country is currently riled by secessionist elements in the Anglophone regions – northwest and southwest regions.