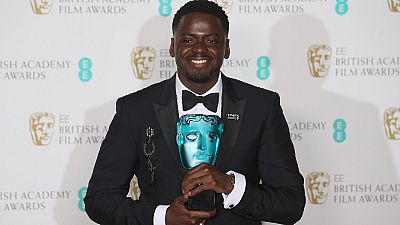 The 28 year old actor whose role in critically acclaimed horror film Get Out has earned him an Oscar nomination beat out stiff competition from Florence Pugh, Josh O’Connor, Timothée Chalamet and Tessa Thompson in the category.

Lupita Nyong’o who won similar plaudits for her breakthrough roles that won her an Oscar for ’12 Years A Slave’ in 2014, led the fans that congratulated Kaluuya.

Lupita and Kaluuya are part of the black dominated cast of Marvel film, Black Panther, which premiered last week and was well received in cinemas across the African continent.

What a whirlwind! Celebrating cinema at #BAFTA, especially with my friend Daniel Kaluuya who won the Rising Star Award!! LancomeUK #lancomelovesbafta pic.twitter.com/KeAVFGyZpw

Congratulations, Daniel Kaluuya! The star of #GetOut and #BlackPanther wins the EE Rising Star award at this year’s #BAFTAs. pic.twitter.com/FUVUcvDYhe

Daniel Kaluuya first Actor of ??origin wins Best Rising star award at the #BAFTA2018 – Daniel’s role in ‘Get Out’ catapulted him not only to the world stage but also earned him a 2018 #Oscar nomination for Best Actor. Heartfelt Congratulations from the #PearlofAfrica Daniel? pic.twitter.com/DS9dMDfc4l

Kaluuya has also picked up Oscar, Golden Globe and Screen Actors Guild nominations for his role as Chris Washington in Get Out.

Founded in 1947, the BAFTAs support, promote and develop talent in film, television and video games, presenting awards to the best films and stars made every year.

This year’s awards were held at the Royal Albert Hall in London, for the second year in a row after being moved from the Royal Opera House.