Zuma criticises ANC, says he is being 'forced to resign' 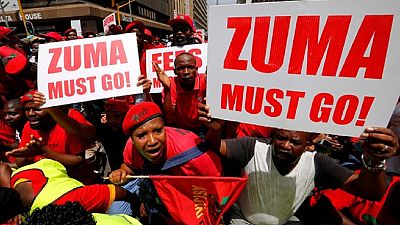 South Africa’s president Jacob Zuma has criticised his party, the Africa National Congress (ANC) for recalling him without taking him through the party’s disciplinary processes.

The president who was addressing the nation on TV for the first time since the debate on his premature exit, said he was criticising rather than defying the party’s decision.

‘‘Why cut it now. I do have a problem, I joined the ANC when I was very young. I have been going to places knowing that I could be killed. It’s the first time that I feel the leadership is being unfair,’‘ Zuma said in an interview with the state broadcaster.

The National Executive Committee of ANC yesterday recalled Zuma from the office of the president and duly informed him.

Today, the party’s parliamentary caucus met and resolved to support a vote of no confidence motion against the president in Parliament, if he refuses to resign.

The speaker of Parliament consequently wrote to Julius Malema of the Economic Freedom Fighters, consenting to the request to move the motion forward to Thursday.

It had earlier been scheduled for February 22.

The ANC caucus also agreed to make amendments to the EFF’s motion, specifically explaining why the ANC is supporting it.

The party also shared a proposed timeline that would ensure that the budget speech is delivered on schedule next week.

[ICYMI] #ZumaRecall Here is a breakdown of how the #ANCcaucus wants the next week to go down: pic.twitter.com/FJmuzm5iuo

ANC has also responded to Zuma’s remarks saying the party notes his criticism and awaits his official response to the recall, as he mentioned in his interview.

‘‘I will make a statement around this matter. I think it’s important. This interview has been helpful. I have been portrayed as this person who is defying the ANC,’‘ Zuma said in his interview.