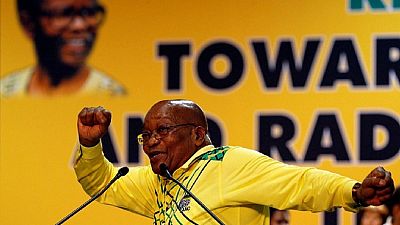 Zuma’s second term as president is set to expire in 2019 but since his deputy president Cyril Ramaphosa won the party presidency in December last year, there has been increasing pressure on Zuma to step down from the country’s presidency in favor of Ramaphosa.

Zuma is seen by many in ANC to be a liability to the ruling party ahead of next year’s elections, mostly because his presidency had been dominated by corruption scandals that are currently subject of judicial proceedings.

The state of the nation address that id traditionally delivered by the president was postponed last week as parliament sought ‘to create room for establishing a more conducive political atmosphere’.

Efforts by top leaders to convince Zuma to graciously step down have so far been unfruitful, hence the meeting by the executive committee which has the power to recall it’s representative in the office of the president.

Analysts have indicated that there is a possibility that Zuma could refuse to heed a party recall, pointing to Zuma’s track record of ‘digging in’ and statements made by the first lady claiming that ‘it is about to get ugly’.

So, the question is, can the ANC enforce a recall of president Zuma?

How to remove a sitting president

The constitution of South Africa provides for two ways of removing a sitting president before his or her term expires; a vote of no confidence in the National Assembly and impeachment.

A motion of no confidence requires a simple majority to pass and compels the president, his Cabinet ministers and deputy ministers to resign.

Currently, a vote of no confidence has been scheduled for February 22, at the request of the opposition Economic Freedom Fighters (EFF).

A previous vote of confidence which was supported by some members of the ruling party was narrowly defeated.

Section 89 of South Africa’s constitution provides for impeachment on the grounds of serious misconduct or serious violation of the Constitution, the law, or incapacity.

It needs a two-thirds majority to pass and a president removed in this way loses all benefits and may not hold public office again.

ANC has a majority in the National Assembly but legislators are not obliged to vote in favour of an agreed party position.

So, while the ANC might recall Zuma in it’s meeting today, that decision alone is not enough to unseat the embattled president from office.