The aftermath of Raila Odinga's 'inauguration' 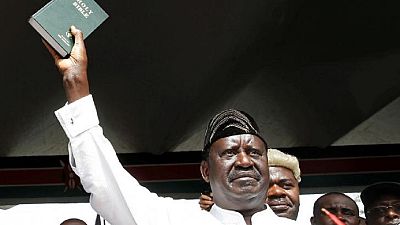 The last of three television stations shut down by the Kenyan government last week resumed transmission on Thursday.

Citizen TV tweeted the news as it urged viewers to tune in and watch the ongoing vetting of cabinet secretaries in the Kenyan parliament.

CITIZEN TV is now BACK ON AIR!
Tune in to your favorite station for normal viewing and catch up with the ongoing #CSVetting pic.twitter.com/ZVt4vqLtnk

The resumption of transmission by Citizen TV and Inooro TV brings to an end the media shutdown that was effected nine days ago, during live broadcasts of the symbolic inauguration of opposition leader Raila Odinga.

The inauguration that had been declared illegal by the government was executed rather peacefully as security agencies withdrew their personnel from Uhuru Park, the venue of the ceremony.

But the aftermath of the symbolic oath has been anything but peaceful.

Other than Citizen TV and Inooro TV, the other television stations that had their signals switched off on account of the Odinga oath broadcasts, were KTN News and NTV Kenya.

A court ordered them to be allowed to resume transmissions a week ago, and the two other stations resumed broadcasting on Monday.

Raila Odinga and Kalonzo Musyoka were the flag bearers for the opposition coalition, National Super Alliance (NASA) in the 2017 presidential elections.

NASA insists that it won the August 8 presidential election whose outcome was overturned by the Supreme Court and it’s these results that it was basing on to swear in Odinga as the people’s president with Kalonzo as his deputy.

On D-day however, Odinga took the oath alone, as Kalonzo and the other two NASA co-principals Musalia Mudavadi and Moses Wetangula skipped the event.

While Odinga laboured to explain that the absence of his colleagues was insignificant, many in Kenya questioned the unity of the alliance and the commitment of the other principals to the cause of the opposition.

Government had warned that taking the oath would constitute a treasonous act, to which Odinga had responded that he was ‘ready to die’ defending what he believed to be right.

Indeed, government has so far arrested three opposition leaders that attended the inauguration.

Two legislators, TJ Kanjwang and George Alwada, plus opposition lawyer Miguna Miguna were arrested and interrogated about the roles they played in administering the oath.

While Kanjwang and Alwada were granted bail and released, government refused to release Miguna even after court granted him bail on the same day he was arrested.

Instead of releasing Miguna, government opted to deport the outspoken lawyer to Canada.

The self proclaimed General of the National Resistance Movement of NASA which was declared a ‘criminal organisation’ by the government immediately after the oath, holds a Canadian passport which government says he renewed in June last year.

Kenyans shocked as Odinga’s ally Miguna is deported to Canada

While government explained that Miguna renounced his Kenyan citizenship, his defenders have questioned the legality of the deportation arguing that Miguna is a Kenyan by birth and his citizenship is guaranteed by the constitution.

Miguna has vowed to challenge his deportation in court and also said that government is ‘afraid of Raila Odinga’.

In an interview with the BBC, Odinga said the people’s government that he leads has six key reforms that it seeks including electoral justice, independence of the judiciary and reform of the country’s police force.

He went ahead to declare that he is seeking a third election that should be held by August 2018, explaining that Uhuru Kenyatta’s government lacked legitimacy since it was elected by less than 20% of the registered voters.

While Uhuru Kenyatta and his deputy are yet to speak out on Odinga’s oath, the Chief Justice and members of the international community have separately voiced their concerns on the developments .

Please see my Statement on failure to comply with court orders. pic.twitter.com/JvrXQB4mTd

Government had ignored court orders to restore transmission signals of banned television stations and also ignored orders to release Miguna, bring him to court and not to charge him.

The United States and the African Union have criticised Odinga’s oath and described it as an act that ‘undermines the constitution’ of the country.

While the US also condemned the media shutdown, the African Union’s statement was silent on the matter, simply offering that it is ‘ready to help’ defuse the situation.