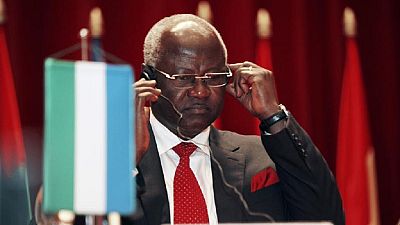 Sierra Leone’s finance minister on Friday played down a decision by the IMF to delay a disbursement because of the West African country’s failure to improve revenue collection, saying the fund would return in May to discuss the programme.

The IMF said on a statement on its website on Wednesday it had delayed its disbursement of the second tranche of programme financing “due to a weak budget revenue outlook, where measures that were to be taken under the programme to increase revenue did not yield”.

“The IMF is currently working with the government to identify appropriate corrective measures,” it said.

Finance Minister Momodu Kargbo told Reuters: “There is no suspension of any support to Sierra Leone”, and that the next tranche of its $224 million 5-year programme would be discussed in May when officials from the fund visit Freetown, after a presidential election on March 7.

“Relations between Sierra Leone and the IMF are very normal,” he said.

Both the IMF statement and the minister’s comments followed a story in Africa Confidential, a London-based publication, which sited a leaked U.S. diplomatic cable reporting that President Ernest Bai Koroma’s government had had its IMF funding suspended because of foot-dragging on reforms such as taxing luxury car imports, and removing subsidies on fuel and rice.

“Two issues are on the table: to float the price of fuel and impose the levy on rice … By the time of the second review those decisions should be taken,” Kargbo said.

Any reforms that spike the cost of fuel or rice, a basic staple in Sierra Leone, would not be popular with the poor ahead of the election to replace Koroma, who cannot run again but is backing his former foreign minister Samura Kamara as successor.

Sierra Leone depends on exports of diamonds and iron ore for revenue. After recovering from civil war ending in 2002, it saw explosive growth early in this decade, but its economy was then battered by an Ebola epidemic and falling commodity prices.