President George Weah lays out his agenda for Liberians

While George Weah has made global headlines since his first presidential bid in 2006, many have criticised the media for focusing on his football success and ‘cinderella’ political story rather than the substance of his politics.

Today, in his inaugural speech as the 24th president of Liberia, George Weah made known his agenda and the priorities his government would pursue in his time in office.

Addressing tens of thousands of Liberians who had made it to the Kanyon Doe Stadium in Monrovia and the millions watching on television, Weah said he was aware of the responsibility his government had to ‘deliver the change you deserve. Indeed, we must deliver the change that our people need, in order to transform their lives for the better.’

I intend to construct the greatest machinery of pro-poor governance in the history of this country. I will do more than my fair share to meet your expectations. I ask you to meet mine, for I cannot do it alone

‘‘I promise to do everything in my power to be the agent of positive change. But I cannot do it alone,’‘ the president said.

Weah went on to address the issue of poverty and income inequality that had been aggravated by the several years of civil war.

‘‘It is my belief that the most effective way to directly impact the poor, and to narrow the gap between rich and poor, is to ensure that public resources do not end up in the pockets of Government officials.’‘

Weah committed to wage a war on corruption, a pledge that was also made by his predecessor in office, Ellen Johnson Sirleaf.

‘‘I further believe that the overwhelming mandate I received from the Liberian people is a mandate to end corruption in public service. I promise to deliver on this mandate.’‘

Talking tough, Weah promised to ‘pay civil servants a living wage’ so that ‘corruption is not an excuse for taking what is not theirs’.

He warned that those who enrich themselves at the expense of the people ‘will be prosecuted to the full extent of the law’.

George Weah’s government will also actively seek investment into the economy from the private sector and foreign direct investors.

He however warned that his government will ‘prioritise Liberian owned businesses even as it welcomed foreign direct investments.

‘‘We will do all that is within our power to provide an environment that will be conducive for the conduct of honest and transparent business. We will remove unnecessary regulatory constraints that tend to impede the establishment and operation of business in a profitable and predictable manner.’‘

The government in Liberia will encourage and reinforce freedom of speech and freedom of political assembly because the president believes these freedoms facilitated his ascendancy to power.

‘‘We could not have arrived at this day without our voices been heard loudly, and all our views, no matter how critical, being freely expressed in an atmosphere void of intimidation and arrest.’‘

The president then indicated that he will work with international partners to spur the economy, saying ‘ the
Liberian economy will require huge investments in agriculture, infrastructure, in human capital, and in technology.’

The president specifically appreciated the support that the country has received from regional body, Economic Community of West African Countries (ECOWAS), the United Nations specifically its peacekeeping missions that supported the country during the years of civil war, the European Union, the United States of America, China and the African Union among other development partners.

The president made a reference to his football career in a special tribute to Europe.

‘‘Without Europe, George Manneh Weah would not be standing here delivering this inaugural address as the 24th President of the Republic of Liberia. It was my success in European football that enabled me to give back to my beloved country. Europe will always have a special place in my heart, and, as President, I intend to strengthen my relationship with the European community for the benefit of all Liberians.’‘

The president concluded his speech by promising to ‘walk the talk’ and re-echoing his call to Liberians to work with him to transform the country.

‘‘My greatest contribution to this country as President may not lie in the eloquence of my speeches, but will definitely lie in the quality of the decisions that I will make over the next six years to advance the lives of poor Liberians.’‘

‘‘I intend to construct the greatest machinery of pro-poor governance in the history of this country. I will do more than my fair share to meet your expectations. I ask you to meet mine, for I cannot do it alone,’‘ the president pledged.

And that’s how this particular match or term of office for Africa’s most celebrated footballer now president kicked off.

The world will be watching and many Liberians will be praying that his success on the football pitch can be translated to results in the political arena. 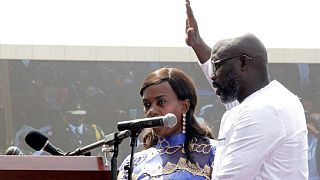 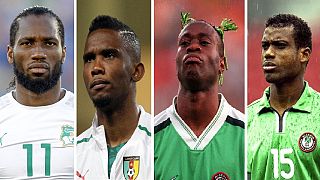 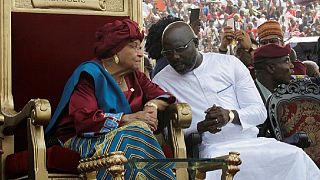