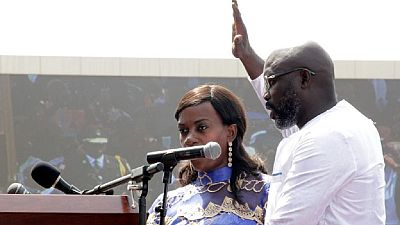 Former African and World Footballer of the year, George Manneh Weah, has officially been sworn in as president of Liberia at a ceremony in the capital Monrovia.

The former AC Milan and Monaco forward took the oath from the Chief Justice at a packed Samuel Kanyon Doe Sports Complex. The event was attended by about a dozen African leaders.

Wearing an all-white attire, Weah put his right hand up with his left placed on a bible held by his wife Clar Marie Weah. Weah was sworn in with his Vice President Jewel Howard Taylor, ex-wife of former Liberian president Charles Taylor who has been incarcerated for war crimes.

Weah finally won the presidency after three straight attempts. HE lost to candidate Sirleaf in 2006 when he stood as a candidate. He won the main vote and lost the run-off.

In 2011, he partnered a former U.N.-executive, Winston Turnbull, but in the capacity of a vice-presidential aspirant, that ticket was unsuccessful as Sirleaf won a second term.