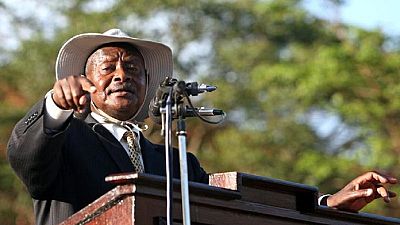 Uganda’s President Yoweri Museveni has vowed to enforce the death penalty again, despite opposition from non-governmental organisations (NGOs) in the country.

“We believe in the Law of Moses; eye for an eye,” he said in a tweet:

We believe in the Law of Moses; eye for an eye

Last week, Mr Museveni said he ‘could start signing death warrants’ while speaking at a graduation ceremony for prison wardens in the capital, Kampala.

The president’s pronouncement sparked an outpouring of criticism and pleas from activists and social media users who urged Ugandans to support efforts to end the death penalty.

Frank Baine: When you're hanged, you are buried by men in uniform in the prison premises and no family member is allowed during the burial. Even after burial, you remain prison property. Via nbstv #EndDeathPenalty pic.twitter.com/41kPuh9FAn

For sure and for good #EndDeathPenalty. An eye for an eye makes the whole world blind.

H. E KagutaMuseveni you have no right on someone's life no matter the offence. And if u think so then u will have to amend the constitution which entitles all Ugandans to life. Mind u he who gives is the only one that can take away so if u didn't give life to anyone think twice

The president in his January 18 tweet argued that the leniency he practiced in not assenting to hanging of convicts seems to have fuelled crime in the country.

In recent years crime has risen, with 20 women murdered in four months in the capital Kampala last year.

Machete wielding criminals have caused havoc in parts of the country killing civilians and security personnel while assasinations of high profile clerics and public figures have also been on the rise in Kampala.

Many of the president’s critics however argue that the government should put more efforts in enhancing the police and other security agencies’ capacity to investigate crime.