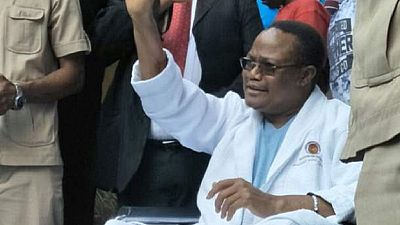 <p>Tundu Lissu, the Tanzanian opposition chief who was shot by unknown assailants in September last year says the country’s politics had taken a dangerous turn thanks to the dictatorial regime led by President John Pombe Magufuli.</p> <p>Lissu is currently recuperating at a Nairobi hospital where he was flown to for specialized medical care. The trained lawyer and avowed critic of Magufuli was shot and wounded by unknown gunmen in the country’s administrative capital, Dadoma.</p> <p>In an interview with the <span class="caps">BBC</span> he described the attack as an assassination attempt and that he felt unsafe at the thought of returning home. He further described the intolerance of political dissent as similar to military dictatorships of decades ago.</p> <p>“Politics, particularly our kind of politics, is dangerous. For 25 years, we were used to peaceful politics, we were used to politics where your argument was answered by counter-arguments.</p> <p>“Now our arguments are answered not by counter-arguments, but by a hail of gunfire. It has become a place where a journalist is abducted and they disappear. </p> <p>“It has become a place where people are murdered, they are shot dead, their hands and feet are tied and they are dumped into the sea and washed onto the beaches. We have become no different from those odious military dictatorships of the 1970s and 80s.”</p> <p>The main opposition, <span class="caps">CHADEMA</span>, and the ruling Chana Cha Mapinduzi – <span class="caps">CCM</span>, both condemned the attack. President Magufuli joined in the condemnation and tasked security agencies to go after the assailants.</p> <p>“The party condemns this violent act and wants the police authorities to search, investigate and take legal action against anyone associated with this heinous act.</p> <p>“The leaders of <span class="caps">CCM</span> are praying for brother Lissu and wish him a speedy recovery so that he may continue with his parliamentary duties,” <span class="caps">CCM</span>’s statement said.</p> <p><strong><em>Photo credit: <span class="caps">BBC</span> Africa Live page</em></strong></p>

We have become no different from those odious military dictatorships of the 1970s and 80s.