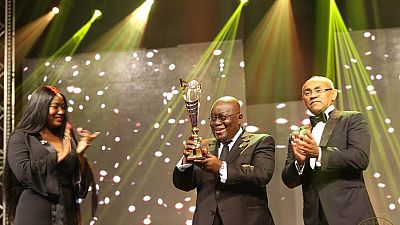 Ghana President Nana Addo Dankwa Akufo-Addo says his incoming peer in Liberia has made the world of football proud. Liberia’s president-elect George Weah recently became the first footballer to rise to the office of president.

Akufo-Addo was speaking during the 2017 Aiteo-CAF Awards event held in Ghana on Thursday. “Indeed, one of the legends of African football has made a successful transition into the world of politics. Ten days ago, he was elected president of the Republic of Liberia,” he said.

He congratulated Weah before disclosing that the 1995 African footballer of the year was scheduled to join the ceremony till the last minute when he delegated his wife, Clar Weah to represent him.

He has shown that there is life after football and there are many career paths, one can opt for in order to continue making an impact on society.

“Congratulations once again Mr President-Elect! Madam, tell your husband that the football world is proud of him. His story to which I can easily relate is one of perseverance, fortitude and determination. These are virtues young footballers should emulate.

“He has shown that there is life after football and there are many career paths, one can opt for in order to continue making an impact on society,” Akufo-Addo stressed.

Weah, the only African to have won the Ballon d’Or (World Best Player) was on the night, a joint Platinum award recipient along with Akufo-Addo. It was his third shot at the presidency having failed in 2006 and 2011 (as a vice presidential candidate).

Akufo-Addo also only managed to win the presidential vote in 2016 after two unsuccessful attempts in 2008 and 2012. A court bid to overturn the 2012 vote failed but he beat John Mahama who had defeated him in 2016 four years later to realise a long held dream of leading the West African nation.

Beside Weah, he paid tribute to the likes of Abedi Pele, Sunday Ibrahim and Abdul Razak of Ghana; Roger Milla and Thomas Nkono of Cameroon, north African duo of Mahmoud el Khatib and Rabah Majeh also got mentions.